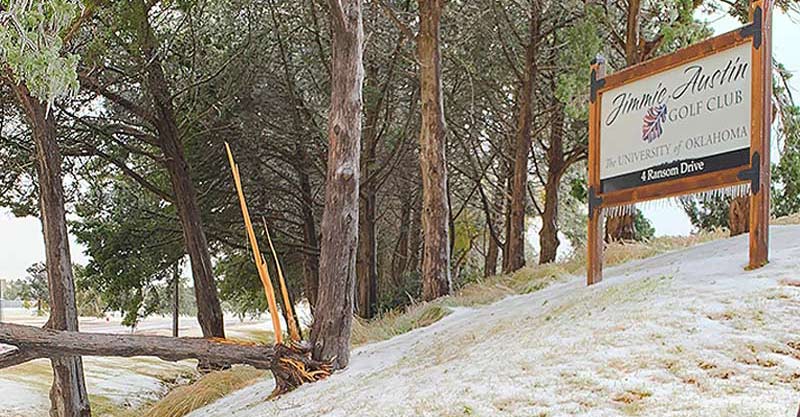 Golf course superintendents throughout much of Oklahoma watched in dismay Tuesday as thousands of tree limbs laden with ice bent, then broke and crashed to the ground. Entire trees in many cases were destroyed.

The early ice storm, happening while many trees have yet to lose any leaves, affected central Oklahoma from south of Norman up to the Kansas border. Courses in Tulsa remained just east of the freeze line and were not affected. However areas in Norman, Oklahoma City and Edmond were rocked.

Cody Elwood, superintendent at Jimmie Austin University of Oklahoma Golf Courses, went to the course Tuesday morning to assess the damage and found it both difficult and dangerous to get around. Limbs were snapping continuously during his visit and icy cart paths were blocked with fallen limbs.

“There are limbs down everywhere,” Elwood said. “Some of our big oaks lost significant limbs. The cart paths were not really passable. We’ll try to get the crew out tomorrow and Thursday and start on the cleanup and see just what we’re facing.”

Chris Garrett, superintendent at Quail Creek Golf & Country Club in Oklahoma City, said he had not been to the course yet, but nearly every tree in his neighborhood just a few miles away was damaged or downed.

“I live two miles straight west of the course and it looks like every tree in my neighborhood has damage,” Jarrett said. “I have four mature trees in my backyard and they have all lost huge limbs. We have more than an inch of ice. It’s going to be a major clean up.” Tom Jones, general manager at Oak Tree National in Edmond, said many limbs were downed but no full trees had fallen and the signature oak tree near the fifth tee box that serves as the inspiration for the Oak Tree logo had survived intact.

Damage was reported heavy at courses as far north as Ponca City but all courses in the affected area were closed, many without power, and the true scope of the damage will be better assessed Wednesday and Thursday.