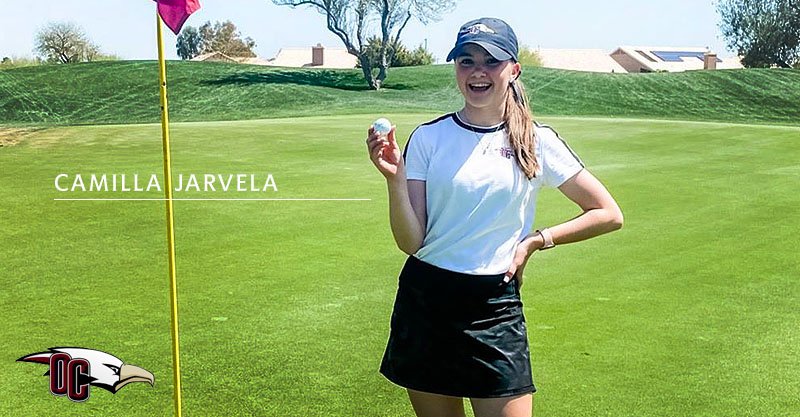 OC posted an even-par team score of 288 at Palm Valley Golf Club and leapt two spots into second place in the 20-team field, a third straight strong performance by the Eagles during a critical portion of the season, one when postseason berths often can be determined.

OC had four players at 1-over-par or better on Saturday. Junior Shaley Goad of Wheeler, Texas, fired a 2-under-par 70, senior Abigail Rigsby of Courtenay, British Columbia, posted a 72 and freshmen Wilma Merenies of Jyvaskyla, Finland, and Camilla Jarvela of Espoo, Finland, each shot a 73.

The 288 was one shot better than the Eagles’ two previous best rounds of 289, first posted in the 2015 Heartland Conference Championship tournament at Slick Rock Golf Course in Horseshoe Bay, Texas (giving the Eagles an unofficial league title) and matched in fall 2016 at The Intercollegiate at Fort Sill Golf Club in Fort Sill, Okla. Rigsby also had a hand in forging the 289 at Fort Sill.

The highlight of Saturday’s round was an ace by Jarvela on the par-3 No. 13, on which she used a 6-iron from 160 yards out. The only other hole-in-one in OC women’s history came in the 2016 West Super Regional, when Kate Goodwin aced No. 13 at Brookside Country Club in Stockton, Calif.

OC started the round in fourth place, trailing first-round leader Texas-Tyler by six shots. (Texas-Tyler eventually finished fifth at 602.) Jarvela’s ace, on the fourth hole of her round, helped to briefly move her into the individual lead and she added two birdies before eventually finishing tied for seventh in the 107-woman field at 146 (2-over). Merenmies, who had three birdies, tied for fifth at 145.

Goad’s 70 – which included four birdies – allowed her to zoom up the standings into a tie for 20th at 150. Rigsby also had four birdies en route to her 72, which gave her a two-round score of 152, good for a tie for 26th. Sophomore Alexandria Bennett of Plano, Texas, tied for 32nd at 154 after a final-round 79.

Point Loma Nazarene’s Nicola Kaminski won the individual title at 2-under 142 after posting a 68 on Saturday.

OC now will turn its attention to preparing for the Lone Star Conference Championship tournament, which is scheduled for April 12-14 at Texas Rangers Golf Club in Arlington, Texas.

The Eagles entered the Arizona tournament at No. 2 in the NCAA Division II West Super Region ranking, which would put them in good position to qualify later this month for the Super Regional, the first step of the NCAA postseason.