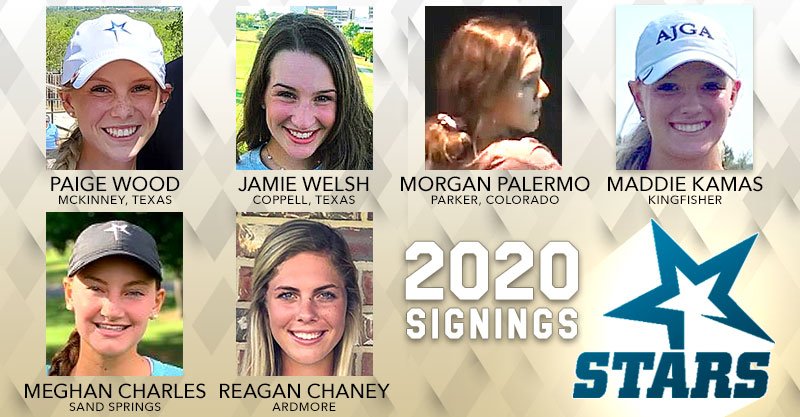 Considering OCU is a perennial contender for the NAIA national championship, that’s quite a statement.

Kamas, of Kingfisher, and Chaney, of Ardmore, have been dominant forces in Oklahoma high school and junior golf for the past three years. Kamas, currently ranked 62nd in the nation by Junior Golf Scoreboard, won 10 Oklahoma Junior Golf Tour events in her junior career and several other events on the Texas Junior Golf Tour.

Kamas won seven consecutive high school events heading into the Class 4A state championship in her sophomore year before finishing second in the state championship. She was on the recruiting lists of many Division I schools but chose to honor the commitment she made to OCU.

Kamas captured the WOGA Stroke Play Championship in June at The Territory Golf Club in Duncan, Okla. She became the first prep golfer to win the tournament, edging two individuals in a playoff. Kamas shot 70-76–146 in the event on the way to her fourth win in five tournaments on the local amateur circuit. Kamas also won the WOGA Oklahoma Junior Stroke Play in June.

Chaney won the Class 3A state championship for Plainview High School in Ardmore. She and Kamas lost their junior seasons to the pandemic, but she had a very strong summer and fall, winning the OJGT Kickoff Classic, taking third in the OJGT Tour Championship and several other top-10 finishes.

“I would say this is by far our strongest class,” McCauley said. “Maddi is by far the highest ranked player we’ve signed and could have gone anywhere in the country. Those two you expect would be four-time All-Americans.”

Meghan Charles won the Class 6A east regional preview at Ponca City Country Club in Ponca City, Okla. Charles finished 28th in the Class 6A state tournament as a sophomore. She carded an 80-87–167 at Earlywine Golf Course in Oklahoma City.

Morgan Palermo finished 10th in the Class 4A Region 1 championship at Kissing Camels Golf Club in Colorado Springs, Colo., as a sophomore. Palermo took 39th in the Class 4A Colorado state tournament at the Country Club of Colorado in Colorado Springs, Colo. Palermo’s uncle Taylor Artman became an all-American with Oklahoma City while leading the Stars to national championships in 2010 and 2012.

Jamie Welsh recorded top-10 finishes in all six tournaments she competed in on the PGA Northern Texas Section Junior Tour in the previous year. Welsh helped Coppell (Texas) to second place in the Heart of Texas Tournament and fourth place in the Texas State Preview as a junior. Welsh intends to study cell & molecular biology at OCU.

Paige Wood made the top 10 three times in tournaments on the PGA Northern Texas Section Junior Tour in the past year. Wood qualified for the 2019 U.S. Girls’ Junior by shooting a 74 at Eldorado Country Club in McKinney, Texas.