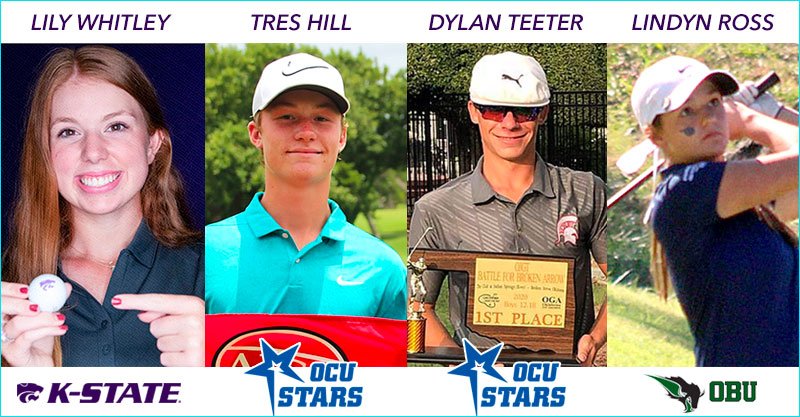 Lily Whitley of Edmond Memorial has signed a letter of intent with Kansas State University.

Whitley has earned three first-place finishes at Oklahoma Junior Golf Tour events and has tallied 20 top-3 finishes. She was the first alternate for the U.S. Girls’ Junior Golf Championship and was crowned the Oklahoma West Regional Champion. Even without having a junior-year golf season due to COVID-19, she has still earned 10 high school tournament wins.

“Lilly’s length off the tee and her demeanor on the course stood out immediately,” KSU coach Kristi Knight said of the Oklahoma native. “She loves to play golf and wants to keep improving. When you talk to her you know she wants to be her best so she can help the team be its best.”

Hill won the Oklahoma Junior Golf Tour’s Tour Championship at Shawnee Country Club and also prevailed in the OJGT’s Earlywine Park Fall Classic, shooting a course-record 62 in the second round. He is ranked 18th in the Class of 2021 by Junior Golf Scoreboard.

“I believe Tres will make an impact right away,” Crabtree said. “He has the firepower to shoot low numbers, and we are thrilled to have Tres join our team at Oklahoma City University.”

Teeter shot 69-64 to win the OJGT’s Battle for Broken Arrow at the Club at Indian Springs by a shot over Ryder Cowan. He and Hill both had their senior prep seasons cancelled by the pandemic.

Ross has been a standout golfer on a great team at Plainview. She has been a part of two state championship teams. The Lady Indians did not get to compete for her third title because of COVID-19 last spring.

Rogers State University has announced the signing of Daniel Robles of Albacete, Spain to a letter of intent.

Note: This recruiting roundup will be updated. Please send any signing information to ken@golfoklahoma.org.