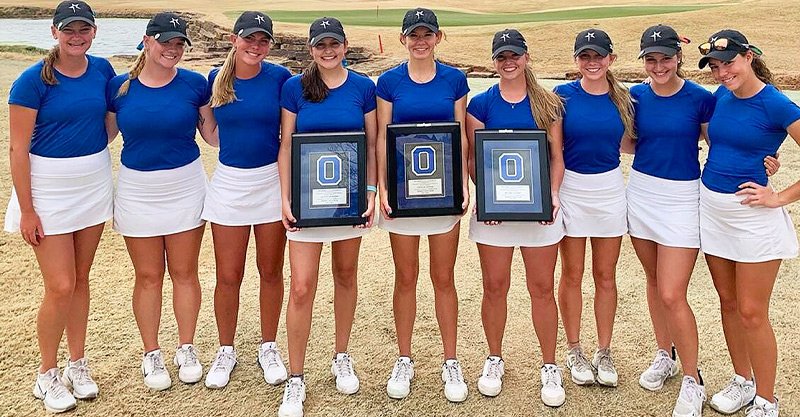 OKLAHOMA CITY – Oklahoma City University won its sixth tournament title of the 2021-22 season with a first-place finish at the Kyle Blaser Invitational, which concluded with 18 holes played on Tuesday at the par-72, 6,075 yard Gaillardia Country Club.

The Stars had three top-five finishes with all five golfers finishing in the top-15. OCU returns to action on Apr. 11-12 at the Susie Maxwell Berning Classic. That tournament will be held at Lincoln Park Golf Course.

Gaillardia, a long course at 6,075 yards, surrendered few birdies on Tuesday. OC had only four as a team, with one of those coming on the par-5 No. 18, Bennett’s final hole, which allowed the junior from Plano, Texas, to post a 7-over-par 79. Her three-round total of 228 put her fourth, 13 shots behind the medalist, Maddi Kamas of OCU.

Merenmies, a sophomore from Raasepori, Finland, tied for fifth in the 56-woman field at 229 after her final-round 78. Benavides Herberth, a freshman from San Luis Potosi, Mexico, had two birdies en route to a 78 and she finished eighth at 230.

Freshman Sarah Sherrard of Moore had the Eagles’ other birdie and posted the top score among OC’s starters on Tuesday, a 77 that allowed her to tie for 13th at 235. Sophomore Alyssa Wilson took 34th at 255 after shooting a 91 in the final round.

OC had three players compete as individuals. Blevins, a freshman from Edmond, fired a 76 and ended up tied with Merenmies for fifth. Junior Sarah Harrison of Edmond (95) and freshman Kaybre Wright of Cushing (111) also played for OC in the tournament.

The Eagles will have a quick turnaround for their next tournament, as they’ll play Friday and Saturday in the RJGA Palm Valley Classic, to be hosted by Western New Mexico at Palm Valley Golf Club in Goodyear, Ariz.