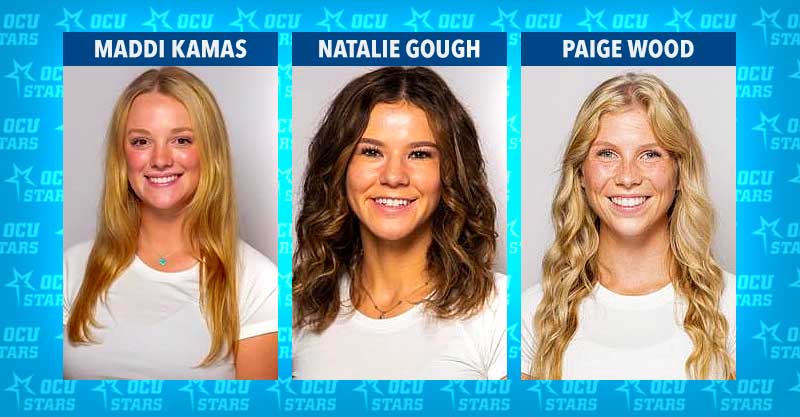 EDMOND, Okla. – Oklahoma City University holds the top three spots after round one at the Grace Shin Invitational at the Golf Club of Edmond. Maddi Kamas, Natalie Gough, and Paige Wood sit in the top three on the Par-71, 5289-yard course. OCU also has the team lead by 18 strokes.

Maddi Kamas got off to a good start birding the second hole and sixth hole on the front nine before hitting two more birdies on the back nine on holes 14 and 17. She ended the first-round carding 70 at one under. Natalie Gough also carded a 70 to earn a tie with Kamas.

Gough birdied five out of the first nine holes to start but ultimately would end round one at one under. Paige Wood earned the lone eagle in the first round on hole 11 and added one birdie to finish with a card of 71 at even.

Morgan Palermo, started with all pars until the sixth hole birdie. She added two more birdies on the final four holes to finish two over and card a 73. Jamie Welsh added two birdies, carding a 75 (4+). Palermo sits tied for fourth and Welsh sits tied for 10th.

Host Central Oklahoma is in third place at 304. Madison O’Dell is tied for fourth after a 73.  Arin Zachary is tied for 10th at 75. Jirasuda Khunrak and Emma Shelley both posted 78s in the first round and Mika Ramos posted a 79. Nanya Hinsui is competing as an individual and shot 86.