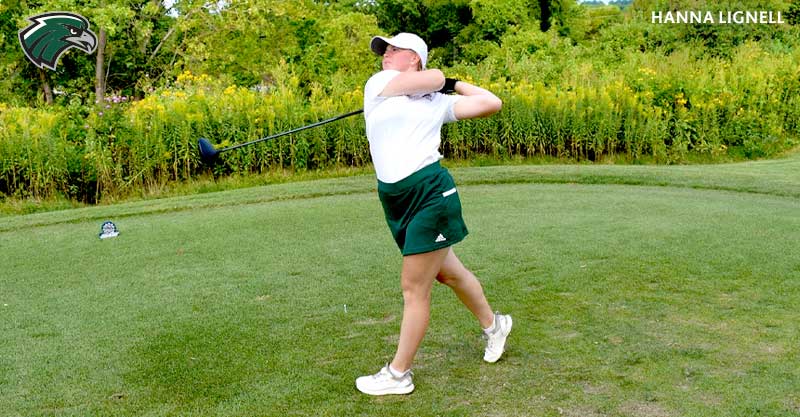 CATOOSA – Northeastern State shot even par on the back nine at Cherokee Hills Golf Course to move into the top spot at the NSU Women’s Golf Classic Monday.

“Hanna is rapidly becoming our next stud, a great talent, with toughness, and grit,” said head coach Scott Varner.  “She showed it today on a very tough track. She was 3 over and became even more determined on the back nine instead of being frustrated.  The great ones have that mindset and grit.”

Aitana Hernandez made an eagle on the 17th hole to shoot 72, one stroke back of Lignell and tied for third place. Nina Lee carded a 76 and is tied for 17th.  Yasmin Hang turned in a 78 putting her tied for 29th overall. Sam Maceli shot an 87 in her NSU debut and is tied for 64th place.

“I love this team’s grit, and we started strong,” added Varner.  “We hit the gauntlet holes out here and struggled.  Collectively, they became focused, determined and showed some serious toughness.  They really care about each other and did not want to let their teammates down.Now we are in a great position to get a win tomorrow.  That is all we ever want, is a chance to win on the back nine of the final round.  Now we have to keep on keeping on and go get it.”


Among other Oklahoma schools in the 15-team tournament, Southwestern Oklahoma State was in fifth, Oklahoma Baptist eighth, Southern Nazarene 10th and Seminole State 15th. The tournament concludes with 18 holes today.