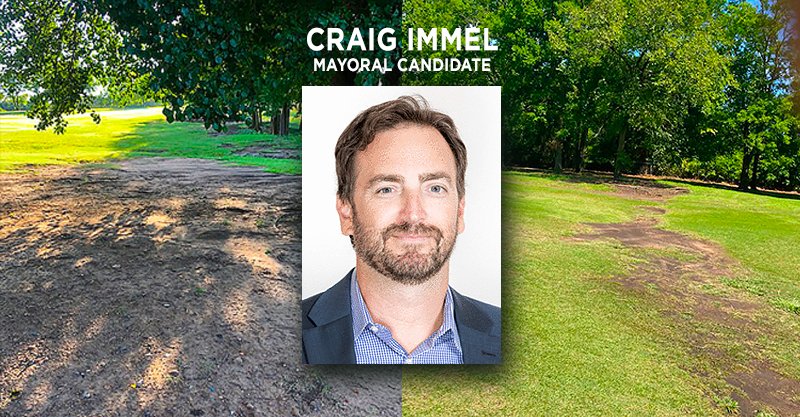 Those frustrated by the past four years of stalling and non-commitment to improving the golf courses owned by the City of Tulsa might investigate the mayoral campaign of Craig Immel. A former employee of well-respected construction and golf course improvement firm Jonesplan, Immel is running an independent campaign to unseat incumbent G.T. Bynum.

Immel was involved in the lawsuit to prevent the city from selling off part of Helmerich Park at 71st Street and Riverside Ave. to a sporting goods store. He said he is a strong advocate of parks in general and golf in particular.

“That all ties together with my broader philosophy regarding quality of life,” Immel said. “We need parks and golf courses and we need to encourage Tulsans to get out more and have healthier lifestyles. Playing golf is an important piece of that puzzle. I would definitely commit to helping with this issue. As long as we own the courses, we should be taking care of them.”

He’s a long-shot but it was refreshing to talk with someone who appreciates golf and golf courses and making sure they are of the quality to properly represent the city. It’s been baffling to have Tulsa try to market itself as a world class city to attract individuals and businesses to relocate here, and then have the city’s showcase golf facility at Page Belcher look like a run-down $12 goat track. Loud gas carts with ripped up seats. Bumpy and broken cart paths. Huge bare areas stretching into fairways. I’m sure that really impressed the executives of Tesla as they were doing their due diligence for the quality of life for their employees.

Tulsa has approved $30 million to parks in the Improve Our Tulsa bond issue, yet neither Bynum or Parks Director Anna America will commit that any of it will be used at Page Belcher. Granted there are many, many needs with parks as they have been allowed to deteriorate rapidly across the city in the past 15 years. But golfers have made it clear at both a special meeting at Page Belcher and by turning out at the bond issue public meetings that they want the course fixed now.

America said there is to be another series of public input gathering and decisions will be made by early 2021. There is no need to gather more input from golfers, they have spoken loudly and clearly.

There’s no secret to the choices that city leaders have either made or had forced upon them over the past 20 years when it comes to allocating precious and static sales tax revenues. Police and fire have been the priority and all else has made do. We watched a veritable army of new TPD cars and SUVs drive slowly past our office for nearly 45 minutes following the funeral of slain officer Sgt. Craig Johnson.  The display of manpower and machines rolling by was impressive and staggering.

Yet former Parks and Recreation Director Lucy Doman saw her budgets slashed annually until she finally retired in frustration. Pools and rec centers closed. Not a tennis court in the city has been resurfaced or improved in many years. Gems like Woodward Park are a weedy shadow of what they once were.

What are our priorities? I want efficient and well trained law enforcement as much as the next guy, but parks, tennis courts and golf courses are things I use on a daily basis, not to mention streets, water, sewage and other city services which have also been squeezed.

Golf is booming in the pandemic and will continue to do so. Play is up at Page Belcher and would be even greater if there weren’t large bare areas on many holes. Specifically, here’s what needs to be committed to now and would likely be done if Immel were mayor.

The 36-hole facility needs an infusion of at least $750,000 to trim and limb up trees, rework all bunkers with new liners and drains and then sod the areas of dirt and other areas where drainage channels have formed in the fairways.

The trees are the crucial first step to improving turf conditions. They haven’t been trimmed in decades and hundreds just need to be removed to allow sufficient air  movement and adequate sunlight to grow grass. This condition is especially acute at Page Belcher as the city makes the course pay full rate for water, so there is no money to plant and keep alive shade-tolerant fescue grass under trees, a practice common at most every other course in the state. Fescue needs water daily in the summer to survive.

Without the option to plant fescue, you have to have sufficient light for zoysia and Bermuda to grow. Or plant drought tolerant Buffalo grass. Anything but dirt and rocks.

Tree lovers will cringe, but it’s a golf course, not a forest, and some tough decisions need to be made.

An even better solution would be for the city to provide water at no charge. Then it could be improved without the need to remove hundreds of trees. With access to free water, superintendent Tomas Hzindo has Mohawk Park in such good condition this year that golfers have been calling the office and our radio show to report how impressed they are.

So that leaves Page Belcher as the major issue. Golfers don’t want any more discussions about it being sold, or chopped up and reduced to 27 holes for a quick buck on a land sale. They want a commitment to put it back in a condition similar to its competitors at LaFortune Park, South Lakes in Jenks, Bailey Ranch in Owasso, Battle Creek in Broken Arrow and the Oklahoma City municipal courses. Nearly every municipality in the state does a better job providing funding and support for its course and the courses in turn are better prepared to bring in sufficient revenue to be self sustaining.

Both courses at Page are excellent layouts. They have zoysia fairways and Champion Bermuda greens. There is still a lot to work with, which is why so many of us play there continually even when we’re frustrated by conditioning.

The golf course management firm gets a lot of unwarranted blame for conditions at Page Belcher. The expectations and priorities are set by the city, which to its credit has made some investments in needed equipment (primarily to replace worn out mowers) in the past few years. Overall, however, the priority has been to keep the courses open and keep any subsidy to the absolute minimum. The result of having no money to ever fix or improve anything is evident. Slow deterioration. Now there is a chance to reverse that with a bit of the bond money.

Fix Page Belcher, set the rates accordingly, pour any additional revenues from the increased play or higher rates into maintenance and let the operator be responsible for keeping it that way.  Do that for five years then let’s see where we are. My guess is in a lot better place and perhaps with the initiative to do some of the other capital improvements needed at both courses. If Bynum won’t commit to it, we now have a candidate who will.