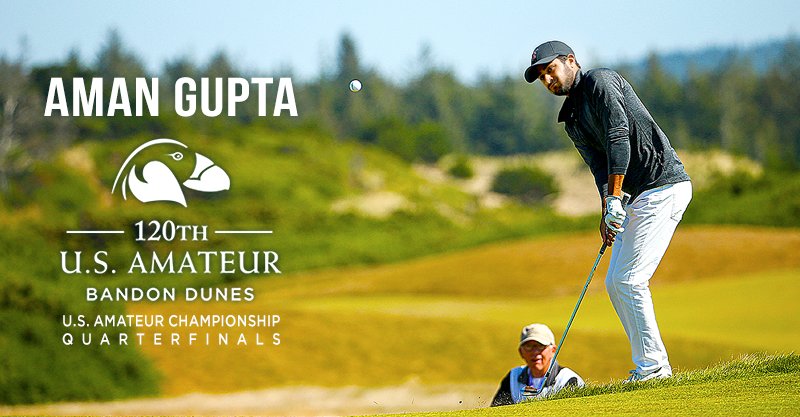 Oklahoma State junior Aman Gupta continued his winning ways in the U.S. Amateur Championship at Bandon Dunes Thursday, defeating Jonathan Yaun of Minneola, Fla.  1 up in the round of 32, then breezing past Sam Bennett, Madisonville, Texas  5 and 3 to reach today’s quarterfinals.

Gupta, the only single-digit seed remaining from stroke play, will play Michael Thorbjornsen of Wellesley, Mass., in today’s quarterfinals. The Oklahoma State rising junior got into the field on Friday when world No. 2 Ricky Castillo withdrew. OSU coach Alan Bratton is Gupta’s caddie in the tournament.

Only one player in the game’s history has managed to win both a U.S. Junior Amateur and U.S. Amateur title, and it’s a household name: Tiger Woods. Two recent U.S. Junior Amateur champions put themselves in position to become the second player to accomplish the feat by winning a pair of matches on Thursday at Bandon Dunes Golf Resort.

Thorbjornsen, the 2018 Junior Am champion, and 2015 winner Philip Barbaree, 22, of Shreveport, La., are among the eight quarterfinalists in the 120th U.S. Amateur.

Joining them in the final eight is 2016 U.S. Mid-Amateur champion Stewart Hagestad, 29, of Newport Beach, Calif., who became the first mid-amateur (25 years and older) to reach this stage of the championship since Nathan Smith in 2014. A mid-amateur hasn’t hoisted the Havemeyer Trophy since John Harris in 1993.

For a fourth consecutive day, Mother Nature delivered the same conditions: sunny skies, temperatures in the low 60s and stiff breezes, especially during the Round of 16 in the afternoon when gusts reached more than 30 miles per hour.

“It was really windy out there,” said Thornbjornsen, who last year at Pebble Beach became the second-youngest golfer to make a cut in a U.S. Open since World War II. “I mean, compared to this morning, it was virtually nothing [on] that front nine. I think on 16 I hit my 20-foot putt 10 feet by, and I just said the wind took my putter; it’s not that it took the ball, it took my putter. There isn’t much you can do about that except I guess have a better stroke. But yeah, it was playing really tough out there.”

Thorbjornsen won the first two holes against Mateo Fernandez de Oliveira, 20, of Argentina, and held on for a 3-and-2 victory in the Round of 16. This came after the incoming Stanford University freshman beat Hugo Townsend, of Sweden, 4 and 2, earlier Thursday.

Barbaree, a rising senior at Louisiana State University, also never trailed in eliminating Pepperdine All-American William Mouw, 19, of Chino, Calif., 3 and 1, in the Round of 16 after defeating 2017 U.S. Amateur Four-Ball champion Frankie Capan, 20, of North Oaks, Minn., on Thursday morning, 2 and 1. Barbaree won three of the last five holes against the talented Mouw, including a bogey-5 on the par-4 17th to close out the encounter.

“Well, it means a lot,” said Barbaree. “I’ve had a pretty good USGA record, and this probably being my last Amateur will be icing on the cake. You know, I think today gutting through that round to get to the quarterfinals, sometimes you have to win ugly to win one of these things, and I kind of just kept my head down, gutted it out and pulled out the win after playing really solid this morning. Sometimes you need to have a little luck on your side and a little bit of fortunate.”

Hagestad, who missed the cut for match play in his first eight U.S. Amateur starts before qualifying the past two years, has now made his deepest run in this championship. Two years ago at Pebble Beach, he fell in the Round of 16 and last year he went out in the Round of 64. On Thursday, Hagestad eliminated Vanderbilt standout Harrison Ott, of Brookfield, Wis., 4 and 3, in the Round of 16. Earlier in the day, he defeated the last remaining player with local ties, Oregon State’s Spencer Tibbits, of Vancouver, Wash., 3 and 1.

Meanwhile, Tyler Strafaci advanced to the quarterfinals with a 1-up victory over Segundo Oliva Pinto, winning the par-5 18th hole when Pinto’s caddie violated Rule 12.2b (Restrictions on Touching Sand in a Bunker) by touching the sand in a greenside bunker to test its condition before Pinto was about to play his fourth shot. The match had been tied before the loss-of-hole penalty was assessed.

“That was one of the best matches I’ve ever played, just back and forth. He’s a great kid,” said an empathetic Strafaci. “We both played great, and for that to happen, I feel really bad for him.”

The quarterfinal matches will take place on Friday at Bandon Dunes beginning at 1:15 p.m. PDT. Peacock, NBCUniversal’s free streaming service, will have one hour of live coverage beginning at 6 p.m. EDT, with Golf Channel picking up the final two hours at 7 p.m. EDT.

“Obviously it’s going to help just because it’s experience being able to play solid golf courses in tough conditions, but I’m not really thinking about it that much out there,” said Thorbjornsen. “It’s just I’ve got this far and I’m playing well. I’m just thinking in the moment really. I mean, I just feel pretty confident in my game right now, and I feel like that’s really good.” – Michael Thorbjornsen on using his experience in USGA events this week

“I’m excited to play tomorrow. My game feels really good still. Just my mindset, I’m just going to go play my game tomorrow, and whatever I got is what I got. If I lose, I lose, but hopefully I can win. I just need to play my game.” – Aman Gupta on his mindset for the quarterfinals

“It’s awesome. It’s a blessing. I mean, I’ve put in a lot of hard work this summer, and for it to pay off, it means a lot.” – Matthew Sharpstene on reaching the quarterfinals

“This is a whole new level. But yeah, I’m pumped. I’m playing well. Mentally I think I’m doing great, handling the conditions really well. Just managing myself through the golf course really well, and hopefully I can just keep that going.” – No. 62 seed Cameron Sisk on reaching his second quarterfinal of a USGA championship and first since the 2018 U.S. Junior Amateur

“I got off to kind of a hot start. I just parred No. 1, he happened to bogey, and then I birdied 2 and 3, and then just kind of just kept building that lead. I struck the ball well, just kind of kept it in front of me, and I was just hitting putts where I needed to go, just kind of lagging it up there close.” – Charles Osborne on his 7-and-5 Round-of-16 win over Carson Lundell

“He’s helping me a lot. He does a very good job on the bag, even at college tournaments when he walks with me. He’s good at figuring out the number and helping you just commit to what you have. He’ll fire you up at certain times, but otherwise he’s pretty even keeled. If you hit a bad shot, he’ll probably say, oh, that was bad or that was terrible, just move on and whatever you’ve got you’ve got. I think that personality fits really well with how I think through golf courses for sure.” – Oklahoma State’s Gupta on having his college coach, Alan Bratton, on his bag

“I learned a lot about my game for sure, but I’m going to be disappointed. It’s going to sting.” – medalist Wilson Furr on his emotions after being eliminated in 19 holes in the Round of 32