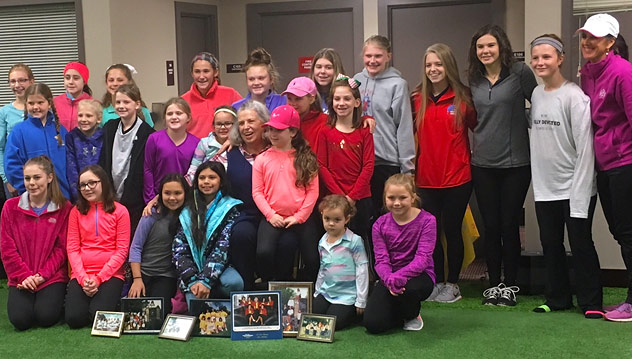 The best year of Dale McNamara’s legendary coaching career was also my first year in Tulsa.

The two events have nothing to do with one another, other than as a Tulsa Tribune sportswriter covering golf I was fortunate to quickly witness what made the Tulsa women’s golf team one of the nation’s dominant and most decorated athletic programs.

Supporting Melissa on that team were four other remarkable young ladies — Blue Kinander, Maggie Kelt, Kelly Robbins and Caryn Louw. Robbins went on to a great career on the LPGA Tour while Melissa has become a storied coach in her own right and is currently running the program at Auburn.

Kelt, now Maggie Roller, has stayed in the Tulsa area, teaching the game out of South Lakes Golf Course in Jenks and working with a host of golf organizations. The work she had done with the LPGA/USGA Girls Golf group is of particular note, and on a frigid Saturday her former coach joined her at the Jenks indoor facility to share her story with the next generation.

McNamara recently turned 81, the only 81 she’s ever enjoyed as one of her friends put it. She had the full attention of the young ladies as she shared stories about her playing and coaching careers, both of which were Hall of Fame worthy. Often overlooked is that McNamara won a then record seven state amateur championships and was poised to turn professional at the age of 21 until a marriage proposal made her reconsider.

She told the young players about how she asked her players to dress and look sharp, but “hit the ball like a man.” About the importance of putting and the short game, about the lessons you can learn from playing and practicing in bad weather.

“Golf is the hardest game of all,” McNamara said. “But also the most rewarding. When you put up a good score or hit a creative shot, you did it, no one else.”

In a question and answer session following her talk, the girls asked some sharp questions, including asking her for the best golf tip she ever heard. McNamara related how she can still hear her long-time coach Jack Higgins telling her that when you step up on a green, “if you were a drop of water, where would you run to?” That nugget helped McNamara read greens throughout her playing career.

She was asked questions about Tulsa’s most famous player, Nancy Lopez, who joined McNamara this year in the Oklahoma Golf Hall of Fame.  And she was asked about her greatest thrill in her 26 years as Tulsa coach, which saw her teams win four titles, finish second five times and dominate the late 1970s and the 1980s.

She went back to that magical year of 1988, a tie that binds her with Roller. It was very cool to witness both of them passing along their wisdom, commitment and enthusiasm to the next generation.