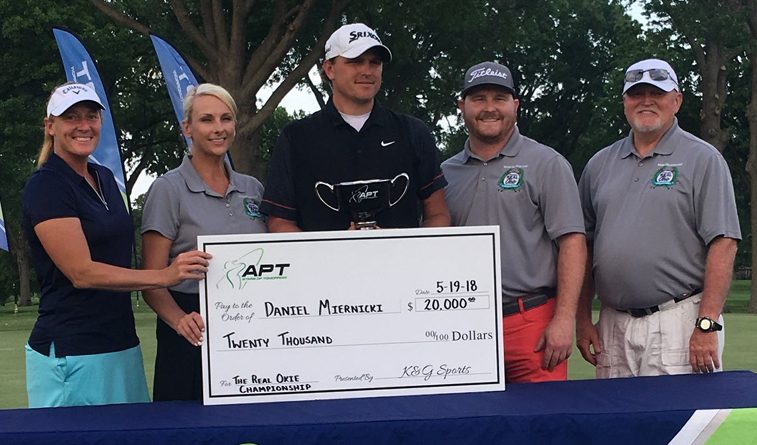 Daniel Miernicki birdied the final hole for emphasis in a two-stroke victory over Vincent Whaley in the Muscogee Creek Nation Real Okie Championship on the APT Tour Saturday at Muskogee Country Club.

Miernicki, of Santee, Calif., closed with a 1-over 71 in the second of two rounds Saturday that made up for a rainout on Thursday. He finished at 19 under and won $20,000 Whaley, who came from well back to share the lead before bogeys on holes 15 and 16, finished at 17 under.

Josh Creel of Edmond, who began the day in second place, got off 3-over starts after two holes in both rounds Saturday. He shot 70-73 Saturday to finish tied for 17th at 7 under.

The best performance by a player with local ties went to former Sooner Michael Gellerman, who closed 66-70 to tie for sixth at 11 under. Gellerman, who now lives in Oklahoma City but plays out of Oak Tree National with Creel and a host of other young pros, played on the Web.com Tour the past two years but did not earn status for 2018. He will be heading for Canada this summer to play on the Mackenzie Tour.

Dillon Rust of Edmond, another of the young Oak Tree gang, shot a pair of 67s Saturday to tie for eighth at 10 under. He was 4 under after five holes of his afternoon round.

Former University of Tulsa player Chris Worrell of Enid, who now lives in Houston, tied for 10th at 9-under with ageless wonder Chris Tidland, who helped OSU win the 1995 national championship. In all his years in Oklahoma Tidland had never set foot on the Perry Maxwell designed Muskogee Country Club layout previously and declared it one of his new favorite courses in Oklahoma.

“This is really, really good,” he said. “The way it moves, the variety of holes, the setting. I like everything about it.”