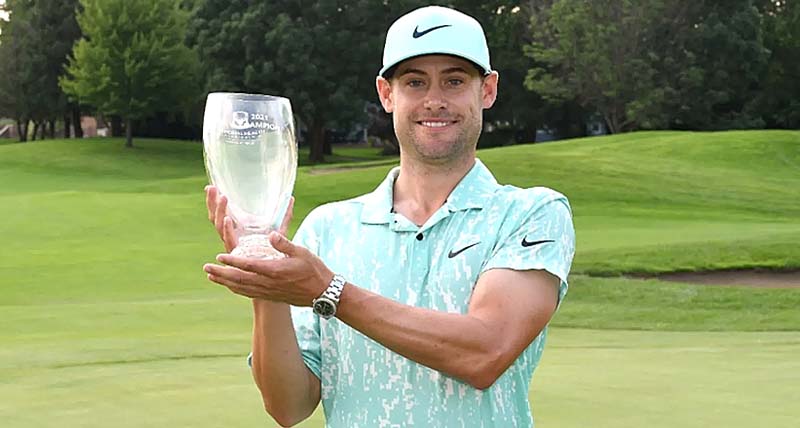 SPRINGFIELD, Ill. – It’s been a whirlwind 24 hours for Taylor Moore. First came his lowest career round and a course record 11-under 60 on Saturday. And on Sunday, the 27-year-old held off Erik Barnes to earn his first Korn Ferry Tour win at the Memorial Health Championship presented by LRS and secure his first PGA TOUR card in the process.

“Yeah, just a ton of excitement obviously,” said Moore. “Been trying to get a win out here for four or five seasons and to finally get it done means a lot. It’s even just icing on the cake for me that I locked up my first TOUR card as well. All in all, a great day. I had an awesome day out there, bogey-free, did exactly what I wanted to do and I was able to get it done.”

In winning, the former state champion at Edmond Memorial became the second consecutive player who grew up in Oklahoma and attended the University of Arkansas to prevail on the Korn Ferry Tour in successive weeks. Tag Ridings, 46, who attended Memorial High School in Tulsa, won the previous week in Colorado.

Players with Oklahoma ties took four of the top 10 spots and six of the top 22. Former Sooner Grant Hirschman tied for fourth at 22-under, Tulsan Charlie Saxon (OU) and former OSU All-American Peter Uihlein tied for sixth at 21-under, Oak Tree National member Josh Creel tied for 18th at 19-under and former Oklahoma City University star Tyrone Van Aswegan tied for 22nd at 18-under. Ridings finished tied for 38th at 15-under and Max McGreevy (Edmond and OU) tied tied for 44th at 14-under, both picking up crucial points as the KFT heads down the stretch of its wraparound season.

Beginning the day in a tie for the lead, Moore carded birdies at the fourth, fifth and seventh holes to make the turn at 3-under. He collected three more on the back nine at Nos. 13, 15 and 16 to build a three-shot advantage that proved to be the winning margin.

“That was sick, that was a lot of fun,” laughed Moore of his “champion’s walk” to scoring. “I have some buddies out here, some caddies spraying me with some beer and celebrating a little bit. That was cool. It was a cool moment for me.”

At 14 years old, Moore nearly chose to play varsity baseball over golf. He attended elite camps and felt he could have a future there. In the end, he chose golf, earned a scholarship at the University of Arkansas, and later turned pro.

With his finish this week, Moore moves to sixth in the Korn Ferry Tour points standings and passes the Tour’s fail-safe threshold of 1,650 points that guarantees he will finish in the top-25 in the regular season, thus earning PGA TOUR membership for the 2021-22 season.

“I was very close [to playing baseball],” reflected Moore. “I was going to some pretty high-level camps at 14 years old for baseball. Growing up, my dad was a high school and college baseball coach. It was just second nature for me and I loved the game. For whatever reason, deep down I made the decision to play golf and quit baseball. Yeah, I just like being in control, I like winning and losing on my own, I like everything that happens is on me and I love that part of the game. I decided to go with golf.”

In 2019, Moore was having some discomfort in his chest and decided to go to the emergency room instead of getting on a plane. He was diagnosed with a collapsed lung which could have been life-threatening with the air pressure on the plane.

“That was obviously a scary deal at the time,” said Moore. “I know we talked about it a little bit. Just gave me a new perspective on life and golf and how I wanted to kind of live my life. Yeah, to come from that in March of ’19, locking up my TOUR card today has been a work in progress.”

For the past three years Moore has sponsored the Oklahoma Golf Association Junior State Amateur Championship at Kickingbird Golf Course in Edmond, providing funds to lift the experience provided to the state’s best male and female junior players.

At 27-under 257, Moore set a new tournament record at the 2021 Memorial Health Championship presented by LRS. The total outpaces Anders Albertson’s 259 from 2018.

“It’s why I do what I do day in and day out,” said Moore of reaching the TOUR. “I made the decision to do this game at 14 years old and I’ve worked every day to be on the PGA TOUR and to be one of the top players in the world and this is a step in the right direction. I’m just really, really excited to keep playing well and get started on the TOUR next year.”

With three regular season events remaining before the three-event Korn Ferry Tour finals, Moore is ranked sixth and McGreevy is ranked 15th. The top 25 in the regular season earn PGA Tour cards, while the top 75 qualify for the finals and a chance at another 25 spots.