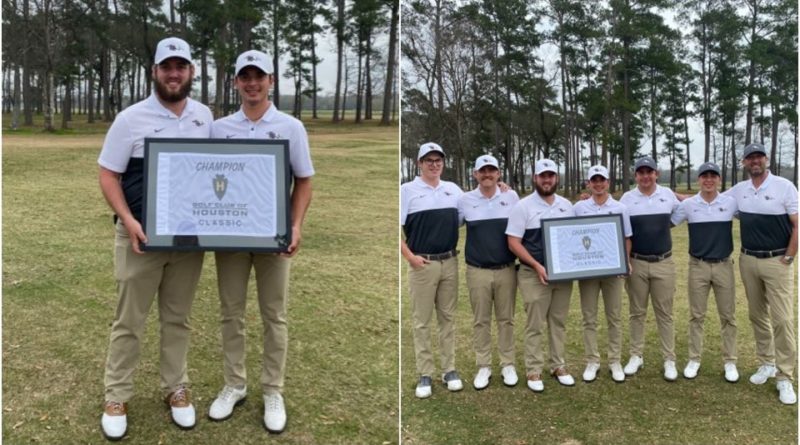 HUMBLE, Texas (Feb. 9, 2021) – Oklahoma Christian golfers Alex Motes and Andres Brictson tied for the individual title and OC stormed to a 22-shot win over a ranked opponent for the team crown on Monday as the Houston Classic ended at The Golf Club of Houston.

It was the 70th tournament title in OC men’s golf history and the second in three events this season against NCAA Division II competition. The Eagles also won their final tournament of the fall campaign, The Hrnciar at The Territory Golf and Country Club in Duncan, Okla.

Motes, a junior from Sulphur Springs, Texas, posted a 69 on Monday to tie with Brictson, a junior from Merida, Mexico, for the individual title in the 49-man field at 213 (3-under). Brictson (who shot a 70) and Motes finished a shot ahead of Garrett Leak of Midwestern State (Texas).

It was the first collegiate win for Motes – who became OC’s 22nd individual tournament champion – and the fifth (and second consecutive) for Brictson, who also won individual honors at The Hrnciar. Brictson is one of only four OC players to have won as many as five tournament titles, trailing only Bruno Buccolo (10), Juan Lizarralde (nine) and Sam Johnston (seven). Buccolo and Lizarralde are in the OC Athletic Hall of Fame and Johnston no doubt will be someday.

It also was the first time OC teammates have tied for a tournament title since 2018, when Brictson and Trevor Norby were part of a three-way tie for the Heartland Conference Championship title at Slick Rock Golf Course in Horseshoe Bay, Texas. Brictson won the playoff in that event. No playoff was conducted on Monday.

Norby, a senior from Carlsbad, Calif., moved up five spots into a tie for fifth at 217 after closing with a 71. OC’s two other starters also posted top-10 finishes, as freshman Mateo Pulcini of Rio Cuarto, Argentina, was eighth at 219 after a final-round 72 and sophomore Alejandro Armijo of Rio Rancho, N.M., was tied for ninth at 220 after posting a 76.

Playing as an individual, OC freshman Chase Gardner of Snohomish, Wash., shot a 77 and finished 40th at 237.

The Eagles won’t play again for almost a month. Their next tournament will be the Las Vegas Desert Classic, scheduled for March 7-8 at Royal Links Golf Club’s Links Replica Course in Las Vegas.