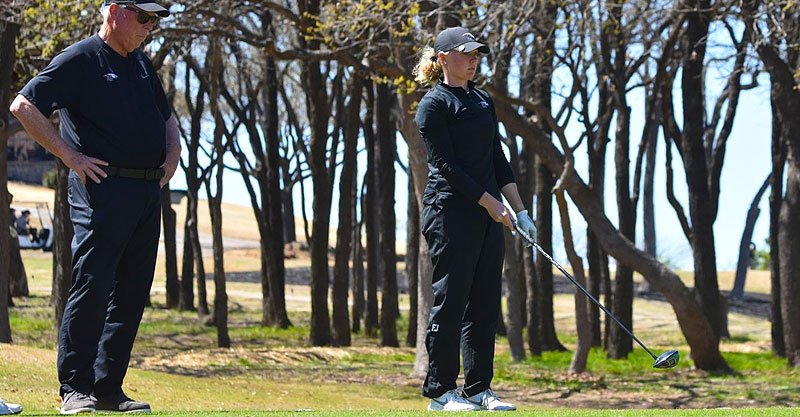 TROPHY CLUB, Texas (March 23, 2021) – It’s not often Oklahoma Christian posts a better score in any round than No. 1-ranked Dallas Baptist (Texas) – one of the elite programs in NCAA Division II women’s golf – but the Eagles did just that on Tuesday in the Lion Invitational.

OC recorded the day’s top round in the 15-team field and moved past No. 11-ranked tournament host Texas A&M-Commerce to finish second behind DBU at Trophy Club Country Club. It was the second straight tournament in which the unranked (for now) Eagles finished ahead of two ranked Lone Star Conference opponents.

The Eagles’ final-round team score of 301 put them at 610 for the tournament, allowing them to close the gap and finish only 11 shots behind Dallas Baptist, which posted a 308 on Tuesday.

OC sophomore Alexandria Bennett of Plano, Texas, continued her individual hot streak with a third-place finish in the 75-woman field, closing her 1-over-par 73 with birdies on her final two holes, the par-5 No. 10 and the par-4 No. 11. Her two-round score of 150 was four shots behind the medalist, Hanna Harrison of Dallas Baptist.

Bennett has finished in the top six in her last three tournaments, highlighted by her first career win last week in the Midwestern State Invitational in Wichita Falls, Texas.

Moving up eight spots during Tuesday’s round and finishing eighth was OC senior Abigail Rigsby of Courtenay, British Columbia. She had only one bogey over her final 13 holes and posted a 75 on the 6,075-yard course, giving her an overall score of 153.

The Eagles had a third top-10 finisher in freshman Camilla Jarvela of Espoo, Finland, who tied for ninth at 154 after a final-round 79. Another freshman, Wilma Merenmies of Jyvaskyla, Finland, shot a 77 and tied for 11th at 156. At 157, tied for 15th, was OC junior Shaley Goad of Wheeler, Texas, who closed with a 76.

OC will close its regular season in the Palm Valley Classic, to be hosted by Western New Mexico at Palm Valley Golf Club in Goodyear, Ariz., on April 2-3. The Eagles then are scheduled to compete in the LSC Championship tournament at Texas Rangers Golf Club in Arlington, Texas, from April 12-14.