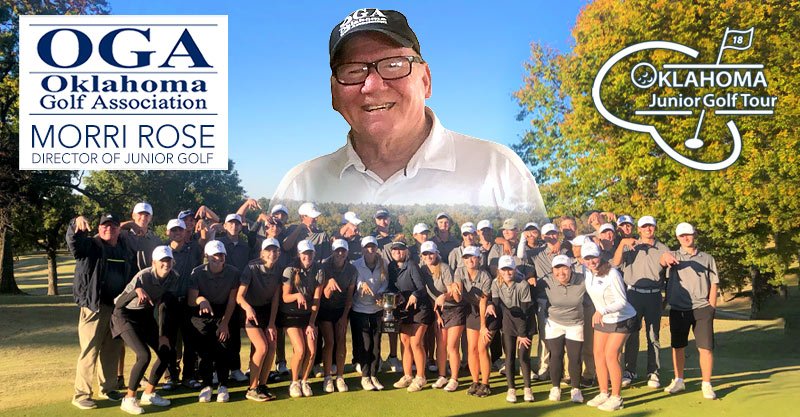 For 22 years, Morri Rose has poured his heart and soul into making sure junior golfers in Oklahoma had a tour that would sharpen their games and provide a pathway to collegiate scholarships and beyond.

In creating, nurturing and developing the Oklahoma Junior Golf Tour, he is largely responsible for transforming Oklahoma into one of the nation’s great success stories of junior golf. The OJGT, with full fields and extensive waiting lists, routinely draws entrants from Kansas, Missouri, Arkansas and even Nebraska, states that do not have junior tours to match its quality.

Oklahoma Golf Hall of Fame 2021 inductee David Edwards of Edmond was the state’s last high school player to earn first team All-America honors in college, doing so at Oklahoma State in 1978, until OJGT graduate Kevin Tway did at OSU in 2011, a 33-year drought. Since then, look at the parade of talent coming out of Oklahoma, and specifically, the OJGT.

An estimated 500 OJGT members have earned college scholarships since Rose began the tour out of his house in 2002. Notable graduates include professional golfers Robert Streb, Tway, Taylor Moore, Talor Gooch, Max McGreevy, Austin Eckroat, Logan McAllister, Quade Cummins, Mason Overstreet, Charlie Saxon, Hayden Wood, Ian Davis (now a top amateur) and many others at various stages of their careers, an incredible litany of success for any state, let alone one with a population of barely four million. The current roster of the Oklahoma Sooners, annually one of the nation’s top collegiate squads, is built on OJGT kids. On the current team are Drew Goodman, Jaxon Dowell and Jake Hopper, with the state’s top high school star Ryder Cowan signed to join next fall. “I truly give the OJGT and Morri credit for allowing a program like ours to get so many great Oklahoma kids,” said OU coach Ryan Hybl. “Every year, going back to Charlie Saxon, our first Oklahoma recruit. We’ve had Kyle Lewis, Max McGreevy, Griffin Pierce, Brad Dalke, Thomas Johnson, Quade Cummins, Lane Wallace, Logan McAllister, Dowell, Goodman, Hopper and Cowan. We owe a lot to Morri and the foundation he’s put in place. The passion that he’s put into that tour, the effort to improve each and every year, the love that the kids have for Morri, he’s just been super impactful and influential on our kids.”

It’s not just boys who have gone on to the pro ranks. Anya Alvarez and Yujeong Son have reached the LPGA Tour while others such as Kaitlin Milligan and Sydney Youngblood have played professionally.

“It was all about Morri and the tender loving care he put into that tour,” said Mike McGraw, former Oklahoma State and current Baylor coach who has spent many a fall day recruiting players at OJGT events. “They didn’t have to travel the country, didn’t have to spend thousands of dollars to sharpen their games.”

Rose, a golf nut himself who was good enough to play collegiately and reached the 1973 Trans-Mississippi Amateur quarterfinals at Prairie Dunes before losing to Gary Koch, is popular because he shares his love not just with players bound for fame and fortune, but also those whose goal may have just to make their high school team.

Now 71, Rose recently announced that 2023 would be his final season running the OJGT. He would like to spend more time with family, including 12-year-old grandson Jordan That sound you hear rolling across the state is the collective groan of every junior golf player and parent in Oklahoma.

To say Rose will be missed might be the understatement of the year. From former players and parents, the outpouring of love and gratitude has already been overwhelming and is just getting started.

“In my family, we all adore him,” said Maggie Roller, whose children James and Jenni played OJGT events from the time they were eligible until turning 18 and receiving college scholarships to Texas Tech and Tulsa, respectively. “He always makes all the kids feel like they are the most important person in the tournament. The kids know that he loves them and he does what he does because he loves them. I’ve never met a more tender-hearted person.”

Perhaps it’s not surprising that the genesis of the OJGT Tour goes back to a conversation Rose had with Mike Holder when Rose’s son Dayton was a Cowboy golfer and Holder was his coach. Rose asked Holder, why he didn’t recruit more Oklahoma players and the always prescient Holder told him having a place to compete in the fall would be a huge benefit in developing Oklahoma players worthy of recruiting.

Rose, who was winding down a 32-year career as a grade school teacher and principal and later a teacher and golf coach at Midwest City High School, took Holder’s suggestion to heart and started the OJGT.  Helped with logistics by long-time friends Kenny Carson and Dan Butler, he also got the crucial support of Oklahoma City pros Steve Carson (Lincoln Park), Alsie Hyden (Lake Hefner) and Larry Flesner (John Conrad in Midwest City), who liked the idea of guaranteed tee times on weekend afternoons while many golfers were off watching the Sooners or Cowboys play football. Rose learned the ins-and-outs of tournament management not only from running the OJGT, but from running events for 10 years (1998-2007) in the winter on the Future Collegiate World Tour, a former rival to AJGA with his events mostly in Arizona or California. He started working for them as a trade to allow Dayton to play, then stayed with the group after Dayton moved on to OSU.

His background as an educator taught Rose to treat each child with respect, dignity and love. But his true motivation to do right for others goes much deeper.  Whether it’s his 32 years in education or the 22 with the OJGT, Rose has strived to help others throughout by remembering the second chances and tough love he received at just the age that many begin playing competitive golf.

“I was no angel as a child,” Rose said, noting that his father Dayton died of a massive heart attack at age 39 and his grandfather Oscar stepped in to help his mother Margaret raise him. Rose and his brother David landed in hot water for an incident at the nine-hole Midwest City Municipal Course (now Hidden Creek), and he had to work grueling hours in the hot sun for the school district to raise $2,000 to pay back golf pro Eddie Abbott for damages. “Eddie was a good man and he and my grandfather taught me a lot of values,” Rose said. “Everything I’ve done since has been to help pay back the chance they gave me. As my grandfather said, everyone can make a mistake and atone for it, if you do it a second time that’s stupid and that’s not going to fly.

“When I signed my letter (to play collegiate golf at Oklahoma City University), Eddie came to me and said, ‘Congratulations, you’ve traveled a short road time wise but a long road in life. Now you’ve benefitted from golf and don’t ever forget to help others do the same.’ And that’s what I’ve tried to do ever since. Really my entire life has been an effort to atone for that.”

Rose ran the OJGT from his house for 11 years before former Oklahoma Golf Association Executive Director Steve Eckroat asked him to join forces. That bond has continued and grown stronger during the tenure of Mark Felder, who announced his retirement from the OGA’s helm last fall.

“Morri has done a great job with the OJGT,” Felder said. “He loves the kids and they love him right back. He’s been great for Oklahoma golf.”

The OJGT started as a series of four to six events in the fall in Oklahoma City, but soon spread to the eastern part of the state as well and also added events in the spring. The season-ending Red River Challenge at Dornick Hills in Ardmore against a team from the Texas Junior Golf Tour has always been a highlight for all the golfers and this year’s final event with Rose will likely draw players from past squads to pay their respects.

As the tour grew it began to earn ranking points from Junior Golf Scoreboard and stars from the American Junior Golf Association, both of which made it even more highly sought by juniors who could, for a fraction of the cost of AJGA events, stay home and face fierce competition in well-run events that honed their competitive skills.

It didn’t take long for scores to begin dropping and scholarships to be dangled. It’s unsurprising to see winning scores for 36 holes be double digits under par on the boys side and under par for the girls.

Two prominent graduates who have credited Rose with much of their success and who have supported Oklahoma junior golf financially are Gooch and Moore. Gooch began a sponsorship of the OJGT last year, while Moore has sponsored the OGA Junior Amateur Championship for several years. The two are having conversations about what they might do together in the future to support junior golf once the new leadership team is in place. “Morri is the face of Oklahoma junior golf and has meant so much to me and so many others,” Gooch said. “I think I was 10 years old when I played in my first event and here we are 21 years later and he’s still going strong. I’m so happy for him to be able to move into the next chapter in his life but it’s definitely the end of an era.”

“There’s been a lot of great players but I think Gooch and Moore are the two fiercest competitors we’ve ever had in the OJGT,” Rose said. “It took me about two tournaments of being around them to see that. Moore I think I first saw at Oak Tree when he was about 12 and all these older boys were throwing money at him because he just skinned them out on the course.”

Moore, ranked 61st on the FedEx Cup standings after the fall season, said the OJGT events were crucial to his development into a world class competitor.

“The competition that Morri created allowing us to hone our skills was a big part of building my game,” Moore said. “He’s got such as special place in his heart for junior golf. It didn’t matter if it was me or Talor Gooch or someone trying to earn the five bag on their high school team, he would give them a hug and tell them he loved them.