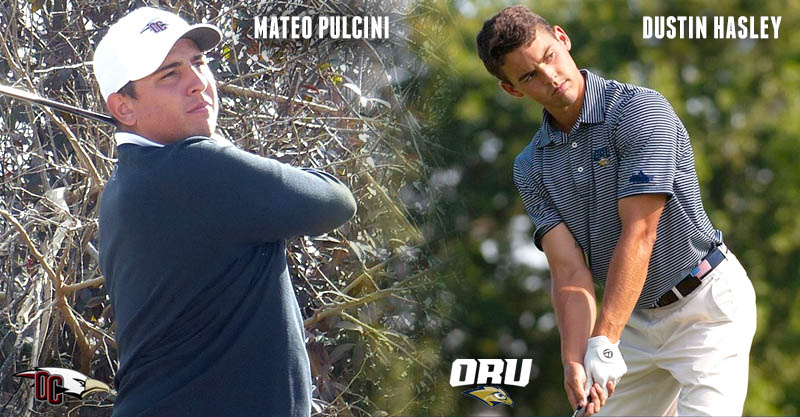 Oklahoma Christian, 11th-ranked in NCAA Division II, won its first two fall tournaments this season against primarily Division II competition, posted team rounds of 296 and 298 on Monday for an overall score of 594. That put the Eagles in a tie with Creighton, Valparaiso and Oral Roberts, two shots behind second-place Loyola-Chicago and 13 behind Arkansas State. Trailing OC were 11 Division I programs.

OC led the tournament during the first round and was a solid second behind Arkansas State for most of the second round, in good part because of a slew of birdies. Freshman Santiago Villareal of Cordoba, Argentina, had nine birdies and an eagle, while his teammates Exequiel Rodriguez, Mateo Pulcini and Alejandro Armijo each had six birdies.

Mateo Pulcini, a sophomore from Rio Cuarto, Argentina, was OC’s top individual, tied for 11th in the 95-man field at 147 after rounds of 75 and 72. Five of his six birdies came in his second round, during which he rose as high as second on the leaderboard at one point.

Santiago Villareal had a roller-coaster of a day. In the first round, he had six birdies and an eagle, the latter on the par-5 No. 10, and held the overall lead at 4-under-par. Despite four bogeys and a double bogey during the round, he still held a share of the lead at the end with a 2-under-par 70 on the 6,565-yard course. He had three more birdies in the second round but finished with a 79, putting him at 149, tied for 22nd.

Alejandro Armijo, a junior from Rio Rancho, N.M., who earned his first career win last week in the NCAA Division II South Central-West Regional Preview in Pueblo, Colo., had rounds of 74 and 76 and was at 150, tied for 30th. Another shot behind was Exequiel Rodriguez, a freshman from Buenos Aires, Argentina, who shot 77-74—151 and was tied for 36th.

Senior Andres Brictson of Merida, Mexico, improved from 77 in the first round to 76 in the second round and was tied for 47th at 153.

Oral Roberts was led by Dustin Hasley,  who finished the day tied for second with a 1-under 143. Hasley sits one strokes off the lead and rolled in 11 birdies total in the first and second rounds.

Hunter Laughlin shot 148 and was four strokes better in round two. Laughlin is six strokes off the lead and tied for 18th. He had five birdies on the day.