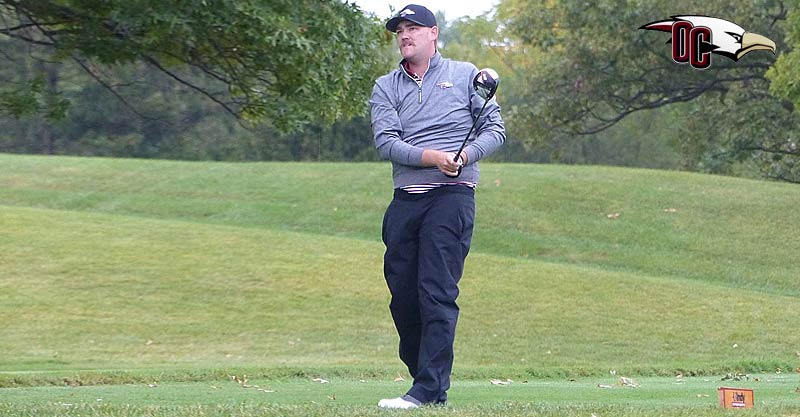 Photo: Senior Trevor Norby led the Eagles in the final round of the Las Vegas Desert Classic with an even-par 72.

LAS VEGAS (March 8, 2021) – No. 18-ranked Oklahoma Christian jumped two teams in the final round on Monday to finish as the runner-up in a stacked field in the Las Vegas Desert Classic, played at Royal Links Golf Club’s Links Replica Course.

With a final flourish, OC – which started the day in fourth place – eased by both Lone Star Conference rival Texas A&M-Commerce and No. 9 Indianapolis (Ind.) down the stretch. OC’s final-round team score of 294 gave the Eagles a three-round total of 861 (3-under-par), one shot better than Indianapolis, two better than No. 12 Colorado State-Pueblo and five better than TAMUC.

No. 23 Central Missouri posted a 14-shot win in a 14-team field that included five ranked NCAA Division II squads. The fifth one, Colorado School of Mines, placed 12th at 896.

OC has finished first or second in three of its four tournaments against Division II competition during the 2020-21 season.

On a day when scoring was at a premium – only eight of the 76 players in the field posted par or better on the 6,962-yard course – OC’s starting quintet on Monday all shot between even-par 72 and 76. Two-time All-American Trevor Norby, a senior from Carlsbad, Calif., led the Eagles with a 72 and tied for eighth overall at 215.

Alex Motes, a junior from Sulphur Springs, Texas, also tied for eighth after a final-round 73. The Eagles had two other top-10 finishers, as Andres Brictson, a junior from Merida, Mexico, and Mateo Pulcini, a freshman from Rio Cuarto, Argentina, each tied for 10th at 216 after posting final rounds of 76 and 74, respectively.

Alejandro Armijo, a sophomore from Rio Rancho, N.M., shot a 75 on Monday and tied for 51st at 227. Competing as an individual, OC freshman Ransen Turner of Edmond, Okla., tied for 55th at 228 following his final-round 82.

Erik Edwards of Indianapolis was the individual winner, finishing at 203 (13-under-par).

OC will play much closer to home next Monday and Tuesday, when they are scheduled to compete in the Broncho Invitational, hosted by Central Oklahoma at Oak Tree Country Club’s East Course in Edmond.