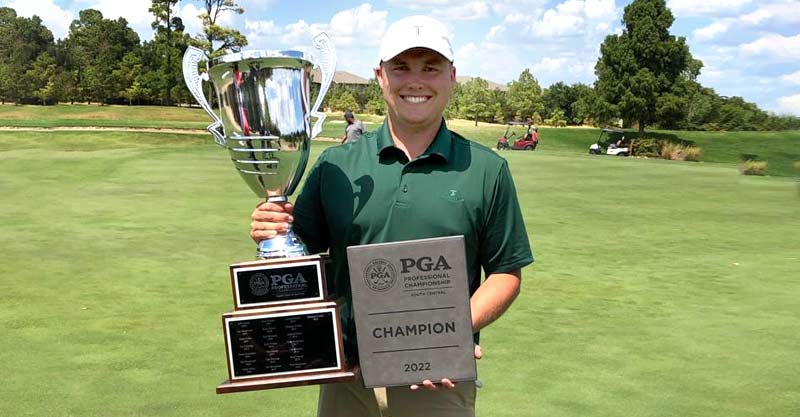 Austin Peters brought an appetite for competition with him when he became the new general manager and head PGA professional at The Territory Golf & Country Club in Duncan last May.

He has competed in all six section events that have been held since he arrived, finishing in the top four in the first five. And Tuesday he introduced himself clearly to his fellow section professionals by winning the South Central PGA Professional Championship at Jimmie Austin OU Golf Course in Norman.

Peters shot a second-round of 3-under 69 to finish at 7-under, one shot better than Tracy Phillips of Cedar Ridge Country Club in Broken Arrow (68-70) and Chris Tidland of Stillwater Country Club (71-67). Those three will advance to the PGA Professional Championship along with Tucker Roderick of The Golf Club of Oklahoma, who won a four-hole playoff with Trent Rommann of Crestview Country Club in Wichita for the fourth and final spot.

The 2023 PGA Professional Championship will be April 30-May 3 at Twin Warriors Golf Club at Hyatt Regency Tamaya Resort & Spa and Santa Ana Golf Club, If they finish in the top 20 there they will play in the 2023 PGA Championship May 18-21 at Oak Hill Country Club in Pittsford, New York. Peters, originally from Iowa, has been working in California for the past 12 years before taking the job at The Territory. He has made his way through the national event to the PGA Championship in the past, qualifying for the 2015 PGA Championship at Whistling Straights won by Jason Day.

“I didn’t do very well, but I had fun,” said Peters, 35. “It does make me want to get back there and give it another effort.”

Peters shot 3-under on the front nine just as he did in his opening round of 4-under 68, during which his ball striking was exceptional but he missed a number of birdie putts from inside 15 feet. This time he held steady at even-par on the back nine.

Phillips would also have finished at 7-under if not for a bogey on the par-4 17th hole. After driving in a bunker left, he pitched out, then his third shot hit the pin and bounded 15 feet away. He missed that as well as having several birdie putts graze the edge to finish a shot back, but safely in the field for national event.

Tidland , who was 7-under for his round and 8-under and in the lead through 12 holes. But he made two bogeys coming in and had several birdie putts

Tidland, the former Oklahoma State great who played the PGA Tour and Korn Ferry Tour, was 6-under through 12 holes but a bogey on the par-5 13th kept him from joining the playoff.

Peters worked at Woodranch Golf Club in Simi Valley, California from 2010-16 and the past six years at the Golf Club at Copper Valley in northern California. He said he is excited to be at The Territory, where this spring he gained an appreciation for why Oklahoma players are so adept at playing in the wind.

Roderick and Rommann were the first-round leaders at 5-under, but both shot even-par 72 Tuesday. Rommann will be the first alternate for the national championship, followed by Shannon Friday of Oklahoma City Golf & Country Club, who won a playoff with Holden Crago of The Oaks Country Club in Tulsa after both finished at 3-under.  Seth Garner of The Country Club of Little Rock finished eighth at 2-under.