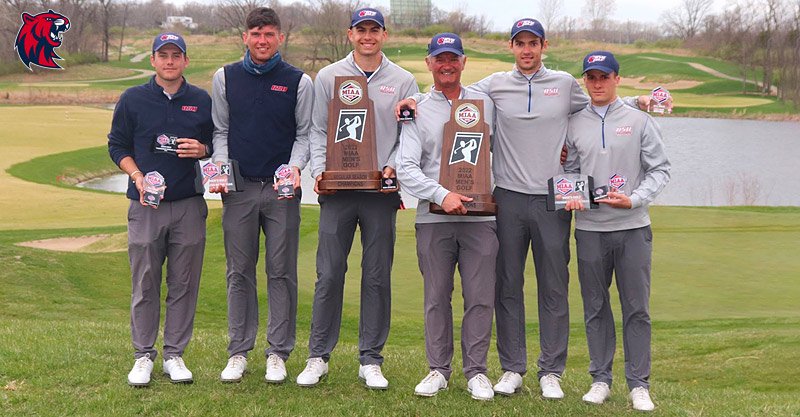 With three of the top four golfers in the field, Rogers State University cruised to the Mid-America Athletic Association championship Tuesday, shooting a final round 295 to finish 16 shots ahead of second-place Central Missouri.

Central Oklahoma was fourth, followed by Northeastern State in fifth among Oklahoma schools.

Aidan Garvey shot rounds of 71-72-74 to finish at 1-over 217 and take second place, four shots behind winner Matt Hoemann of Central Missouri. Daniel Robles Delval was third for RSU at 218 and Luke Palmowski was another shot back in fourth at 219.

Ty Nicar closed with a 75 and placed 19th and Gonzaol Chavez shot 76 and placed 20th.

Central Oklahoma had a trio of top-20 individuals in finishing fourth. The Bronchos shot a final-round 299 in ending the two-day, 54-hole tournament with an 896 total at the 6,752-yard, par-72 WinterStone Golf Course.

Evan Griffith and Kyle Hickey both shot 74 to lead the Bronchos on the final day. Bennett Baldwin closed with a 75, while Liam Coughlin shot 76 and Caleb Kimmel 77.

Kimmel placed fifth in the individual standings with a 220 total. Griffith tied for 18th at 227 and Coughlin was 20th at 228.

“We didn’t play as well as we needed to,” head coach Derrick Thompson said. “I thought our guys fought hard and hopefully we will get another chance to play this season.”

UCO will find out Friday if it will earn an at-large berth into the NCAA Division II Central Regional Tournament, which will be held May 5-7 in Noblesville, Ind.

Behind a 302 score in the final round of the MIAA Championship, Northeastern State slipped back a spot and finished in fifth place, carding a 900 on the par-72, 6752-yard WinterStone Golf Course.

Despite having three players in the top-15 on the leaderboard, the RiverHawks couldn’t overcome a pair of 80+ individual rounds Tuesday.  Carlos Gomez and Gabe Replogle shot even 72s to lead the team.

Northeastern State will most likely be a qualifier for the NCAA Super Regional on May 5-7 in Noblesville, Ind.  NCAA postseason announcements will be made on April 22.