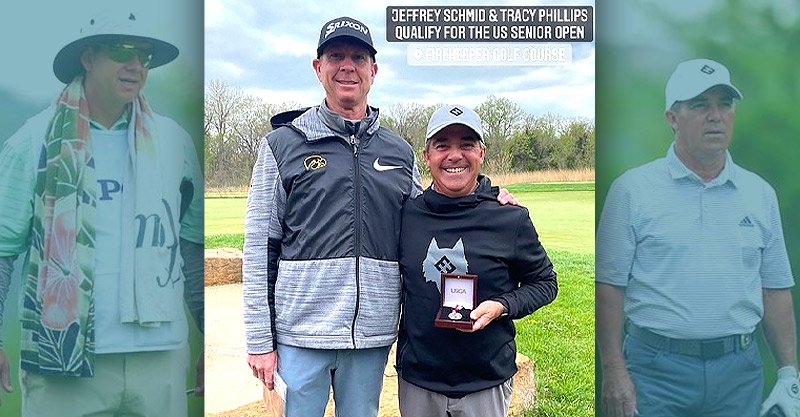 Tracy Phillips, who missed qualifying for the 2022 PGA Championship by two shots, is lining up some pretty sweet consolation prizes.

Phillips had already qualified for the 2022 KitchenAid Senior PGA Championship May 25-29 at Harbor Shores in Benton Harbon, Mich. This week he won the qualifier at Firekeeper Golf Course near Topeka, Kan., to play in the 2022 U.S. Senior Open June 23-26 at Saucon Valley in Bethlehem, Pa.

Phillips did it by shooting a 5-under 67 on a cool, wet day with 20 mph north winds in which the second best score was a 71 by the only other qualifier, Jeffery Schmidt.

“It was a tough day in hard conditions, but I’m playing really well,” said Phillips, who had five birdies, no bogeys and lipped out several other birdie putts. He hit every fairway but one in regulation and all greens but three. He started his day with a 15-foot birdie on the first hole and capped it by rolling in a 20-footer for birdie on the 18th hole.

The U.S. Senior Open will actually be the first USGA event for the 59-year-old. Phillips said he qualified for the U.S. Junior but opted out because he didn’t like match play at the time. He has missed the cut by a shot frequently in other USGA qualifiers over the years, but this will be his first.

With back-to-back majors to compete in the next two months, is Phillips over the sting of his near miss in the PGA Professional Championship at Omni Barton Creek, in which the top 20 finishers qualified for the 2022 PGA Championship?

“Well, I would have loved to have played the PGA in my hometown,” Phillips said. “It would have been hard. But I’m playing well and I didn’t let that disappointment affect my mental game. I’m confident right now in the way I’m playing.”

Other Oklahomans who missed qualifying were Michael Gotcher of Broken Arrow at 77, Jim Young of Oklahoma City at 78, Ricky Bell of Norman and Todd Graves of Edmond each at 80.