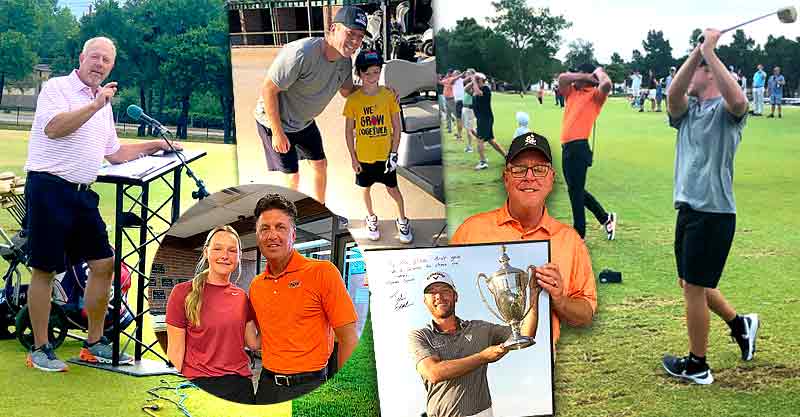 The mood was celebratory at John Conrad Golf Course in Midwest City Friday, as it officially reopened to the public with speeches, exploding golf balls, celebrities and raves for the renovation.

The course had actually had a soft opening on July 9 and immediately set records for daily rounds and revenue, exceeding 300 players daily on the weekends That’s what happens when a golf-loving community has had to wait for 18 months for a popular course to undergo a more than $5 million facelift.

Native son and professional golfer Talor Gooch was in the first group out along with course architect Conor Cummings of Heckenkemper Golf and Morri Rose, the director of the Oklahoma Junior Golf Tour. Gooch, who grew up playing at John Conrad from the time he could walk and who now plays on the LIV Golf circuit, played the front nine only on his first trip back to the course and shot 3-under from the tips, Both Cummings and Rose said he raved about the changes.

The course has all new creative and imaginative greens designed by Cummings and built by United Golf, owned by Tulsan Dale Forrest. The greens are in protective mode during this heat wave, but if speeds increase this fall will become even more of an adventure.

Director of Golf Larry Denney said the reaction to the redesign, which in addition to the greens included switching the nines, removal of hundreds of trees, addition of a unique practice facility and rerouting of several holes, has been overwhelmingly positive.

“Whether you play golf or not, you can be proud of this play,” Sullivan said. “Billy Harless, our community development manager, said let’s do something really spectacular with this place and do something that anyone can enjoy whether they play golf or not. Conor and Randy (Heckenekemper) accepted that challenge. The three-hole practice area can be closed down and closed into a three-hole circuit. Our event lawn can be used for live music or movies.”

The celebrities, including Gooch, Oklahoma State football coach Mike Gundy and many city and community leaders, lined up on the range to hit exploding golf balls.

“Since word got out, we’ve been slammed,” Denney said. “The greens and the practice facility are the two home runs by far. A lot of guys coming through the clubhouse saying ‘great job pro, really nice.’ It was an interesting project, with all the changes made and one you do on this scale once in a lifetime. It’s pretty exciting.”

There was concern among some that the amount of contour on the greens would intimidate some golfers but that quickly dissipated.

“Every putt is a fun putt, not only for the golfer making the putt, but the other golfers in the group watching,” Heckenkemper said, “I think they turned out great and Conor deserves the credit. It’s greens you would expect to pay high prices to play at Bandon Dunes or Streamsong, but they’re here in Midwest City.”