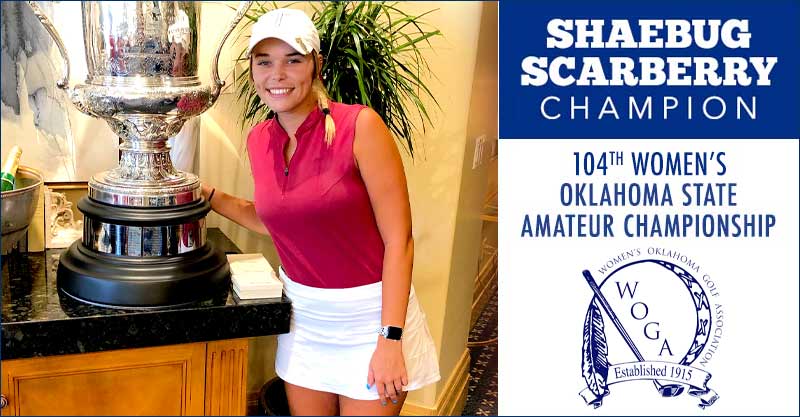 Both contestants in the Women’s Oklahoma Golf Association State Amateur championship match at lush Gaillardia Country Club were striping the ball off every tee box, attacking flags and demonstrating a masterly touch around the greens.

There was just one club separating Shaebug Scarberry of Tuttle and Lilly Whitley of Edmond in the end and that was the putter. Scarberry’s was red hot and Whitely’s stone cold.

Scarberry not only made three birdies but several clutch par saves as she defended her title in the state’s top event for women amateurs, winning 5 and 3. It was a closer match, however, than the final score might indicate.

Whitley, who transferred this summer to Missouri State in Springfield after spending her freshman year at Kansas State, has developed her game considerably since her junior days and was eager to prove it. Her ballstriking was excellent all week but the putter let her down in the final match after being one of her best clubs up to the final.

“My putter was really hot the rest of the week,” she said. “But today I think I was setting up a little closed and missing everything to the right. Plus I was tense as well. I haven’t been in too many scenarios like this and it was fun to be in the arena. I worked hard all week to make it to the finals and it was rewarding to get there. But I also badly wanted to win it.”

She jumped out to an early lead when Scarberry made her lone bogey of the match on the second hole while Whitley had a short conceded birdie. Scarberry evened the match with a birdie on the par-3 fourth hole, then followed with an 8-foot birdie on the par-5 sixth, a 10-foot par save on the seventh when it looked like Whitley would even the match, then a  6-foot birdie putt on the eighth hole gave her a 2 up lead at the turn.

The match was decided on holes 10-12. Whitley stuffed her approach shots inside 10 feet on both the par-4 10thand par-4 11th, but missed both birdie putts. She then missed a short par putt on the par-4 12th. Instead of being even or one down, she was three down.

Pressing after that, she lost the par-5 14th and the par-3 15th . And there was no let up from the defending champion. Scareberry saved par again with an 8-footer on 10, then made solid pars the rest of the way.

“She was flag hunting at the start and it made me a little nervous,” said Scarberry, a fifth-year senior at Troy this fall. “She’s a good golfer. But I made that birdie on four and that settled me down. Then the birdie on 6, the par save on 7 and the birdie on 8 was a really good stretch for me.”

Scarberry said she didn’t let herself think about winning the event back-to-back until the end. She also made it to the finals in 2019, losing to Sydney Youngblood at Oak Tree Country Club. She defeated Janet Miller in the finals in 2021 at The Territory.

“I’m excited to win this back to back,” Scarberry said. “I tried not to think about it too much. I just went out there to hit golf shots and make some putts. I see Patty Coatney’s name is on that trophy nine times, so I have a long way to go to catch her.”

Scarberry plans to give professional golf a try after her senior season at Troy. Whitley is undecided about whether she will redshirt this year. Missouri State has six seniors, including Faith Belmear from Owasso Faith Hopkins from Bartlesville is also on the squad.

“I feel like I’ve always had crazy potential and always been right on that bubble,” Whitley said. “I haven’t peaked yet by a long shot. I’m getting better every day, every month. I’m a late bloomer. A lot of girls in junior golf got a lot more publicity than me, but I wanted to show that I’m a force to be reckoned with out here.

“Today, the birdie looks were not falling. And Shae was playing really, really well. You have to make a birdie to beat her and I respect that.”