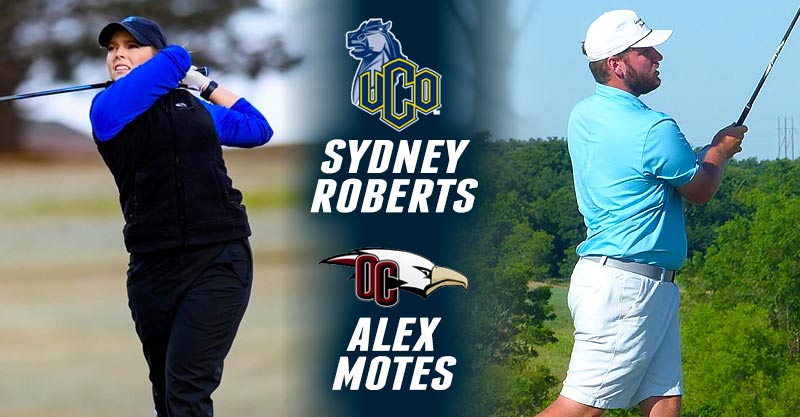 College Around Oklahoma Oklahoma Christian
February 9, 2021February 9, 2021 Ken MacLeod
Like and Follow Golf Oklahoma
40
CARROLLTON, Texas. – Sydney Roberts fired a 1-over-par 73 to help get Central Oklahoma within one stroke of the team lead after second-round play in the Southern Invitational Monday afternoon. The final round was canceled Tuesday due to extreme cold, leaving the Bronchos in second.

The Bronchos knocked 16 shots off their first-day score in carding a 307 and have a 630 total, just one shot behind tournament host Central Missouri heading into Tuesday’s final round at the 5,893-yard, par-72 Indian Creek Golf Club (Creek Course). Harding is third in the 10-team tourney at 640, followed by Rogers State (648) and Oklahoma Baptist (657).

Roberts had one of four scores in the 70s for UCO on the day, with Susana Olivares shooting 76 while Mika Ramos and Emma Shelley both had 79s. Madison O’Dell added an 86 and Emily Miller shot 84 playing as an individual medalist.

“Pin placements and undulating greens are the biggest defense this course has,” head coach Michael Bond said. “We came out and did a good job of not wasting shots by makings some good ‘bogeys’ and we put ourselves in a good position for the last day.”

Roberts carded 15 pars in her 73, which was the low round of the day and 15 shots better than her first-round score.

“Sydney started with eight straight pars and had 15 pars on the day with a birdie and two bogeys, which is a phenomenal round,” Bond said. “I’m happy for the great bounce-back round she had and look forward to seeing what she can do tomorrow.”

Olivares had another steady day, making 12 pars and two birdies in a 76 that has her fifth in the individual standings with a 154 total. Ramos recorded 11 pars and is tied for sixth at 157.

Rogers State maintained it’s fourth-place standing with a 322 in the second round and have  a two-day score of 648 to sit a +72.

After tying for the team lead on day one with an 81, Sydney Murray again was at the front for the Hillcats, posting a 79 in the second round to climb two spots into a tie for tenth overall. The senior had two birdies and nine pars in her round.

HUMBLE, Texas (Feb. 8, 2021) – Oklahoma Christian’s opening day of the 2021 spring golf season on Monday had plenty of positives for the Eagles – an ace, four players in the top 10 and a nine-shot lead in the Houston Classic at The Golf Club of Houston.

After two rounds on a temperate day, with temperatures in the 60s and light wind, No. 20-ranked OC posted a team score of 573 (3-under-par), good for a nine-shot lead over No. 11 Arkansas Tech (582). The only other squad in the nine-team NCAA Division II field within reasonable striking distance was Southern Arkansas, which was third at 587. The University of Central Oklahoma is fifth after the first round.

The Eagles’ day started with a bang, as junior Alex Motes recorded an ace in the first round on the par-3, 171-yard No. 7 using an 8-iron. It’s thought to be only the second competitive hole-in-one in OC’s considerable men’s golf history and the first since Sam Johnston recorded one on Oct. 24, 2012, in the final round of the National Christian College Athletic Association Championship at The Hombre Golf Club in Panama City Beach, Fla.

Motes, a junior from Sulphur Springs, Texas, finished his round with a 2-over-par 74 and followed with a 70 on the 6,945-yard course to move into a tie for fourth in the 49-man field with teammate Alejandro Armijo, a sophomore from Rio Rancho, N.M., who shot 71-73—144.

They were one shot behind OC junior Andres Brictson of Merida, Mexico, who was tied for second at 1-under 143 after rounds of 73 and 70. Brictson and Andres Jacobs of Arkansas Tech trailed the leader, Ryan Timmerman of Southern Arkansas, by one shot.

Freshman Chase Gardner of Snohomish, Wash., playing as an individual, shot 83-77—160 and was in 41st place.

Kylian Cavdar and Carson Tewell led Central Oklahoma to a fifth-place standing. The Bronchos opened with a 293 in the morning round before coming back with an afternoon 304 and were 24 shots behind the leaders.

Cavdar and Tewell both started the day with 1-under-par 71s and each shot 77 in the afternoon to finish with four-over 148 totals that has them tied for 14th in the individual standings. Peyton Knell shot 77-74, while Yannic Oppenheimer had rounds of 77-76 and Jacob Lackey shot 74-81.It’s the first tournament appearance since March 10, 2020 for the Bronchos after the rest of that spring campaign and the fall 2020 season were canceled by the COIVD-19 pandemic.