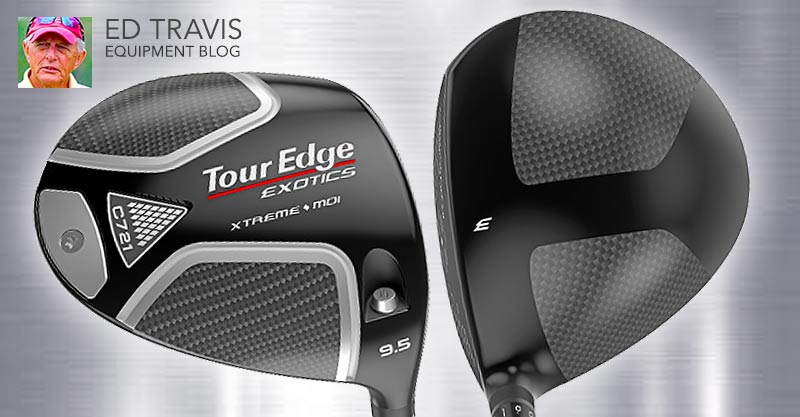 The two panels of carbon fiber in the crown that wrap around on to the sole of the Tour Edge Exotics C721 driver straddle a titanium center ridge lower the center of gravity and help make the face built with 43 diamond-shaped areas more responsive.

Tour Edge has introduced some interesting features in the Exotics 721 driver that according to the company makes it their most advanced driver ever.

The crown is designed with what they call Ridgeback Technology consisting of a titanium center ridge running from front to rear with “Carbon Wings” on either side. These panels of carbon fiber wrap around from the crown and become a large portion of the sole. Since carbon fiber is much lighter than titanium a lot of weight is saved, and the center of gravity is lowered helping both ball launch and forgiveness. On the interior of the titanium face there are 43 diamond shapes that provide seven different thicknesses across the entire hitting area, the effect of which the company describes as minitrampolines. Face thickness at the perimeters is 20% less than the previous model and this helps to retain ball speed when impact is not in the center.

The Exotics 721 has a 10-gram rear sole weight to shift weight back and lower which improves head stability (MOI) while helping produce lower spin plus along with the face at least in part compensates for off-center hits. Players will also like the optional 5-, 15- and 18-gram sole weights for precise fitting.

“With Exotics 721, we have forged a new path to optimal performance, power and feel for the vast majority of golfers,” said Tour Edge founder and President David Glod. “The key is utilizing more carbon fiber than we have ever used, about 20% more on the driver and fairway with these awesome Carbon Wings that surround our new Ridgeback tech, and our first ever carbon crown hybrid. We also have upgraded our Diamond Face tech to Diamond Face 2.0 that has doubled the amount of interweaving variable thicknesses and an extreme thinning of the face to create more power and forgiveness at the extreme perimeters.”

Continuing their idea of swing speed calibrated shafts, the Exotics 721 was robot tested to determine the proper stock shaft for a range of swing speeds from less than 85 mph to over 105 mph.