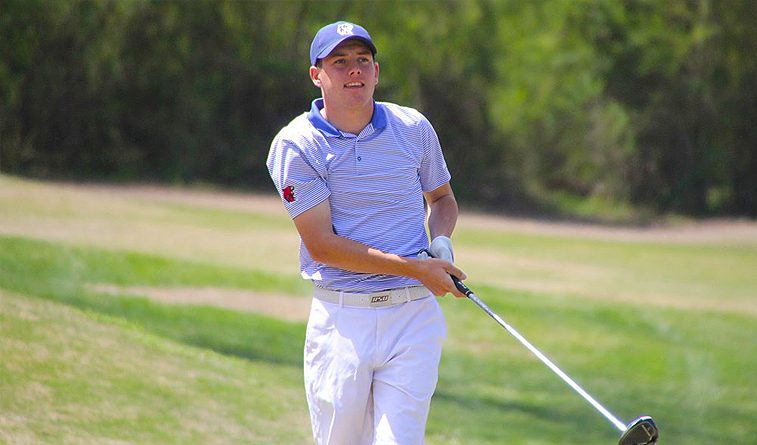 The Rogers State men’s golf leads the Heartland Conference Championships after firing a school record-tying score of 278 in the first round on Sunday (April 22) at the Slick Rock GC at Horseshoe Bay. Freshman Aidan Gavey is tied for first individually after the opening round with his score of 5-under-par 67.

As a team, the Hillcats shot 10-under-par for the team score of 278 to hold a six shot edge after 18 holes. UA Fort Smith ranks second six shots back at 284. Oklahoma Christian is in third place at 285 with St. Mary’s and Newman tied for fourth at 286.

Gavey, a freshman from Caledonia, Ontario, is tied for first with two other golfers at 5-under-par 67. He used one eagle and four birdies in today’s opening round with only one bogey and 12 pars to go 5-under-par. The 5-under-par 67 ties the third best round in RSU single round school history in both total score and relative to par.

Senior Alex Marsh ranks in the top five as well in a tie for fourth overall with his first round total of 3-under-par 69. Marsh and Gavey both took advantage of the par 5s, going 4-under-par on them to tie for the best in the field. For the first round, the senior totaled four birdies and one eagle.

Freshmen Gonzalo Chaves and Luke Palmowski posted identical scores of 1-under-par 71 for the final two scoring spots for the navy and red. The duo ranks 11th overall for four Hillcats in the top 11. Chaves registered a team-high five birdies, ranking second in the whole field. Like teammates Gavey and Marsh, Chaves was strong on the par 5s at 3-under-par for his round. Palmowski turned in a nice day on the par 4s at 2-under-par for fourth in the tournament field.

Freshman George Burnett put together a round of 4-over-par 76 for RSU on day one to currently rank 35th overall. He totaled 14 pars to place second in the tournament field in the first round.

Parker Jennings of UAFS and Emilio Gonzales of St. Mary’s are tied with Gavey in first place at 5-under-par 67. Cam Toombs of Lubbock Christian is in fourth with Marsh at 3-under-par to complete the top five.

The RSU score of 278 ties the school record set two other times. The first occurrence was on Sept. 18, 2012 at the U.C. Ferguson Classic and the score happened again at the St. Edward’s Invitational on March 10, 2015.

The second round of the Heartland Conference Championship is set to start tomorrow (April 23) at Slick Rock GC at Horseshoe Bay.