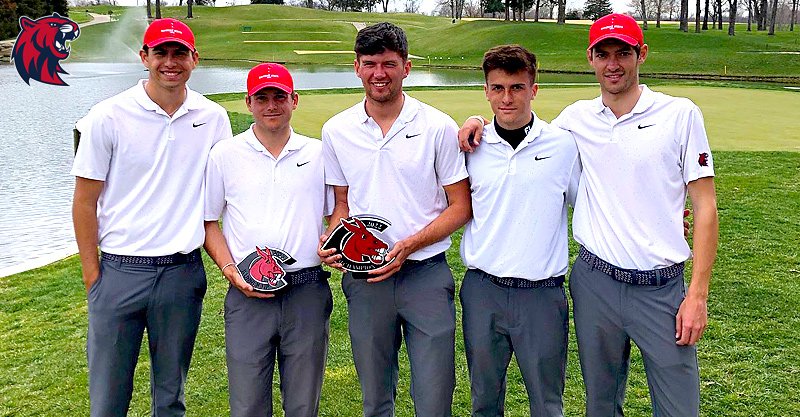 WARRENSBURG, Mo. – No. 13 Rogers State men’s golf wrapped up the regular season by winning The Mule on Tuesday. This is RSU’s seventh-straight tournament victory.

After three rounds at the Par 70, 6,428-yard Mule National Golf Club, the Hillcats won the tournament after turning in a card of 8-under 832.

Aidan Gavey led the team with a second place finish after shooting 206 (-4), just two strokes off the leader. The senior sank 13 birdies in the three rounds.

With the regular season complete, the Hillcats will now turn their attention to the MIAA Conference Championships in Independence, Mo. beginning on Monday, April 18th at the Winterstone Golf Club.

Evan Griffith fired a 2-under-par 68 in the final round to lead Central Oklahoma to a fourth-place showing.

Griffith’s 68 led UCO and allowed him to come in fourth in the medalist standings with a two-under 208 total. Bennett Baldwin had a final-round 71, while Kyle Hickey and Caleb Kimmel both shot 73 and Ross Taylor 79.

“We played pretty solid today,” head coach Derrick Thompson said. “Evan really played great the last two rounds and finished strong. It was a good tournament for us, but there’s still a lot of improvement we can do in the next couple of weeks.”

Griffith, who shot a four-under 66 in Monday’s second round, started the final day on No. 1 and made one bogey on the opening nine to make the turn at one-over 36. The sophomore was still one-over after 12 holes before birdieing the par-5 13th, par-4 17th and par-3 18th to come back with a back-nine 32.

Baldwin knocked in three birdie putts in a four-hole stretch to get to three-under after 12 holes. The freshman made back-to-back bogeys to drop back to one-under before closing with four straight pars to come in with the one-under 71.

It was the final regular-season tournament for the Bronchos, who now prepare for the MIAA Championships that will be held April 18-20 in Independence, Mo.

Southwestern Oklahoma State placed fifth in the tournament. SWOSU was led by Conner Boydston who finished tied for sixth at 1-under overall. His best round came in his last, where he carded a team best 4-under 66.

Anders Strand led the field after day one after shooting a 67-69 but a third round 77 dropped him to a tie for 16th overall.

Gregor Weck shot a final-round 72 and finished at 8-over.

The team now turns its attention to the Great American Conference Championships that will be played in Hot Springs, Arkansas April 10-12.