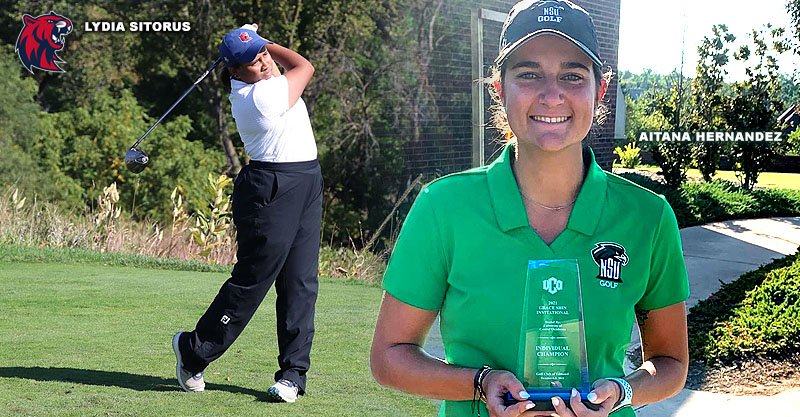 EDMOND, Okla. – Lydia Sitorus and Ellen Loving tied for second at 1-over 143 to help Rogers State win the Grace Shin Invitational Tuesday at the Golf Club of Edmond.

NSU’s Aitana Hernandez won the individual title by a stroke after a second-round 1-under 70 put her at 142.

The RiverHawks were on the heels of the eventual team champions Rogers State and pulled within a stroke before finishing 8-over on the closing four-hole stretch.

Susana Olivares led a final-round charge that put her and host Central Oklahoma among the leaders on the final day. Olivares closed with a 2-under-par 69 to tie for second in the individual standings, while the Bronchos knocked 12 strokes off their first-round score to come in third after starting the day in sixth place.

UCO shot a final-round 291 to finish at 593. Rogers State won the 20-team tournament with a 586 total, three shots ahead of Nebraska-Kearney and five in front of the Bronchos.

“We played much better today to at least gave ourselves a chance,” UCO head coach Michael Bond said. “The girls came out really determined and they stayed focused all day.”

Taylor Towers paced the second team with a 72. Faith Stewart shot 78, while Arin Zachary added a 79 and Emily Miller an 82.

Towers had four bogeys and three birdies in her one-over-par round and ended up tied for 16th individually with a 149 total. Ramos and Shelley tied for 18th in the medalist standings with 150 totals.

UCO continues the fall season Sunday and Monday with a trip to Hot Springs, Ark. for the Central Regional Preview.