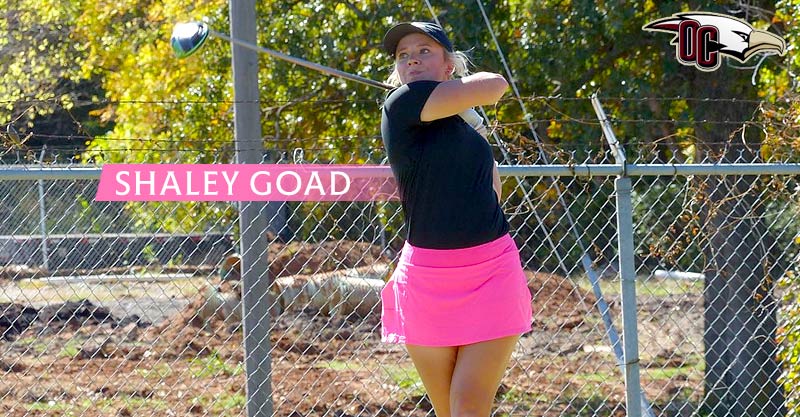 WICHITA FALLS, Texas (March 15, 2021) – With its best team round in more than four years, Oklahoma Christian vaulted atop the leaderboard on Monday in the Midwestern State Invitational at Wichita Falls Country Club.

The 291 (3-over-par) was the third-lowest round in OC history and the best since the Eagles posted a 289 (1-over) in the Oklahoma Intercollegiate at Fort Sill Golf Course in Fort Sill, Okla., during the fall 2016 season. Goad’s 1-under-par 71 matched the second-lowest round in the 11-year history of the Midwestern State tournament, which first was played in 2010.

With those sorts of numbers, it wasn’t a surprise to find OC players high on the leaderboard in the 63-woman event. Bennett, a sophomore from Plano, Texas, and the reigning Lone Star Conference player of the week, continued her recent surge, shooting rounds of 75 and 73 on the 5,836-yard course. At 148, she was in second place, two shots behind West Texas A&M’s Loukyee Songprasert.

Also in contention was Jarvela, a freshman from Espoo, Finland, who was third at 150 after rounds of 76 and 74.

Two OC veterans – Rigsby, a senior from Courtenay, British Columbia, and Goad, a junior from Wheeler, Texas – struggled in the opening round, shooting 83 and 85, respectively. But they both turned it around in the second round, with Rigsby shooting a 73 to go with Goad’s 71. Goad had four birdies in her round while Rigsby had three. They both were tied for 13th at 156.

The final round will begin at 8:30 a.m. Tuesday. OC is the defending champion in the tournament, which last was played in 2019.