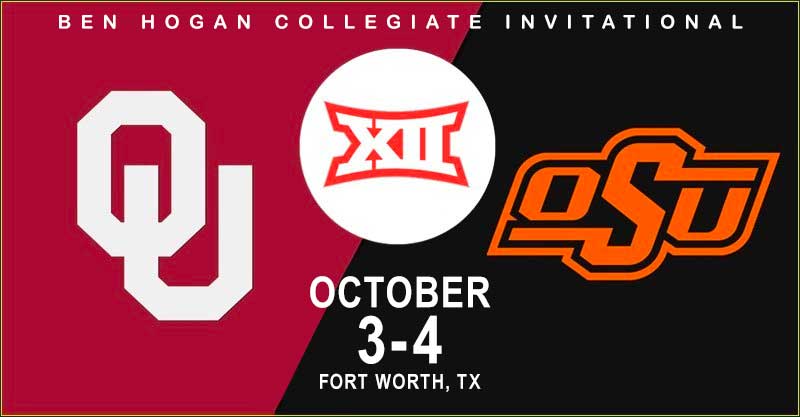 FORT WORTH — Oklahoma and Oklahom State resumes their fall schedules Monday when they tee off at the Ben Hogan Collegiate Invitational at Colonial Country Club in Fort Worth, Texas.

The loaded 16-team field boasts 13 top-25 teams, highlighted by seven teams in the top 10, including No. 2 Oklahoma and No. 10 OSU. The Sooners have played the nation’s eighth toughest schedule this season, and Colonial will provide another challenge for head coach Ryan Hybl’s team. The Ben Hogan Collegiate will be contested over 54 holes of play, with teams playing 36 holes Monday and 18 on Tuesday.

In their last time out, the Sooners finished in third at the Inverness Intercollegiate falling to No. 7 Texas Tech and No. 8 Georgia Tech. Jake Holbrook led the Oklahoma contingent with a career-best T9 finish, followed by Jase Summy (T12) and Patrick Welch (T15) inside the top 15.

The Oklahoma lineup at Colonial will look a bit different as transfer Luke Kluver makes his OU debut. The Norfolk, Neb., product spent three years with the Jayhawks and was instrumental in leading KU into the top 10 last season. He’ll be joined by Holbrook, who makes his third start of the season after not appearing in the lineup over the last two seasons. Freshman Jase Summy will look to continue the hot start to his college career, as he owns a pair of top-15 finishes this season. Stephen Campbell Jr., who has finished inside the top 20 at his last four events, grabs the No. 3 bag for Oklahoma, while sophomore Drew Goodman looks to get back into the top 15 after a T28 finish at Inverness.

Oklahoma State’s opened the fall season with a seventh-place showing last month at the Olympia Fields/Fighting Illini Invitational. Individually, fifth-year standout Rasmus Neergaard-Petersen led the way for the Pokes with a ninth-place finish.

At last year’s event at Colonial, the Cowboys finished in a tie for third place.

Live scoring will be available at golfstat.com.

Opened in 1936, Colonial Country Club has hosted the Colonial National Invitation on the PGA Tour since 1946, the longest running non-major event on TOUR. Designed by John Bredemus and Perry Maxwell of Oklahoma, the par-70 course has also hosted a U.S. Open (1941), a Players Championship (1975) and a U.S. Women’s Open (1991).

The two-day, 54-hole event tees off on Monday morning when the teams will play 36 holes, followed by 18 more on Tuesday.

Oklahoma returns to Colonial for the third straight season, winning the event in 2020 and finishing as the runner-up in 2021. The Sooners were one of two teams under-par last season, falling to Stanford by a stroke. In 2020, Logan McAllister won medalist honors as OU was the only team under-par, knocking off Texas by six shots. The win marked Hybl’s 25th of his career, and OU has won 10 more times since that tournament.

Live scoring will be available on Golfstat.com (link above).