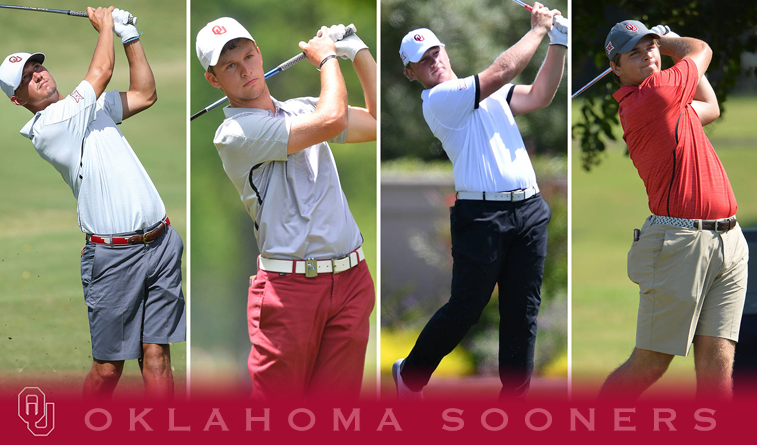 A total of 32 golfers were named honorable mention All-America, including four players from national champion Oklahoma and four from Oklahoma State.

University of Oklahoma golfers Max McGreevy, Grant Hirschman, Brad Dalke and Blaine Hale were selected, marking the most All-America honors in one season for the OU men’s golf program since 1989.

This is the second All-America honor for both McGreevy and Hirschman, as McGreevy was named a third-team selection in 2016 and Hirschman claimed honorable mention accolades in 2015. It is the first All-America recognition for Dalke and Hale.

“All four of these guys had special moments this year and are deserving to be an All-American,” Hybl said. “We recruit guys to be All-Americans, and it is fun to see them have these types of successes.”

All four Sooners were pivotal in helping the program secure the 2017 NCAA title. After putting together consistent rounds during stroke play, each golfer won at least one match in match play to clinch the program’s first national championship since 1989.

This season, both McGreevy and Hirschman won two individual tournaments while Dalke won one, combining for five overall individual crowns to set a program record for total wins in a single season.

In his final season with the Sooners, McGreevy posted a team-best 71.40 (+0.21) scoring average over 43 rounds of stroke play to mark the second lowest stroke average in program history, according to records dating back to the 1993-94 season. His wins at the Golf Club of Georgia Collegiate and the Lone Star Invitational brought his career total to three, making him the winningest golfer under Hybl.

Overall, the Edmond, Okla., native finished in the top 20 in 10 of 14 team events this season, including six times in the top 10. He also totaled 16 rounds in the 60s, doubling his total from his junior year. At the Lone Star Invitational, McGreevy matched school records for single-round score (63) and 54-hole total (196).

Hirschman was impressive in his junior campaign, recording a 71.60 (+0.42) scoring average. This average comes in over a stroke better per round over the average of his previous All-America season, a 72.75 (+1.40) in 2014-15. Entering this season with eight career rounds in the 60s, Hirschman fired 13 sub-70 rounds as a junior.

The Collierville, Tenn., native earned his first career title at the Gopher Invitational in September. He then won the elite Southern Highlands Collegiate in March with a victory on the first playoff hole. In total, Hirschman placed in the top 20 eight times and in the top 10 four times this season.

Dalke’s sophomore season was highlighted by his first career win, a victory at the NCAA Stanford Regional to lead his team to its seventh straight championships berth. He recorded all three rounds of the regional in the 60s, including a career-low 64 (-6) in the second round, to post a career-low 54-hole 198 (-12).

Overall, the Norman, Okla., product totaled five top-20 finishes this year, including three consecutive top-10 finishes at The Maxwell (T10th), the Big 12 Championship (T9th) and the NCAA Stanford Regional. He shot eight total rounds in the 60s on the season and posted a 72.13 (+0.98) scoring average.

Hale started his sophomore campaign hot, recording a 70.60 (-0.60) scoring average during the fall season. This average marked the lowest fall average in team events by a Sooner since Hunter Haas in 1998. Hale fired a career-low round, 66, three times in the fall, and he was named the Big 12 Co-Golfer of the Month in November.