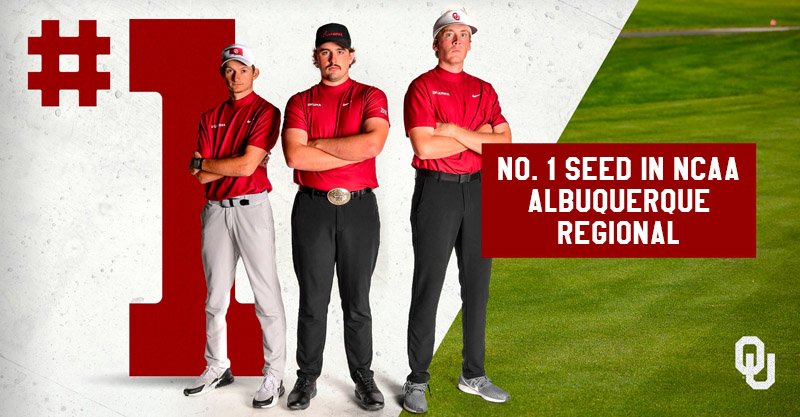 NORMAN – The top-ranked Oklahoma men’s golf team was awarded the nation’s No. 1 overall seed and has been selected to the NCAA Albuquerque Regional, set for May 17-19 at the University of New Mexico Championship Course in Albuquerque, N.M.

The Sooners, led by four All-Americans and 12th-year head coach Ryan Hybl, will make their 10th consecutive NCAA Regional appearance and 48th overall appearance in school history. It’s the third straight postseason that the Sooners have been named a No. 1 seed, and Oklahoma is the only school in the nation to appear in every NCAA match play since 2016, winning the national championship in 2017.

“We’re excited to be the top seed and heading to Albuquerque,” Hybl said. “We feel like our guys play some of their best golf when we head out west. The level of competition will be high, and we know that we’ll need to play our best golf if we want to advance, but we look forward to the challenge.”

The 14-team, 54-hole tournament is one of six NCAA Regionals and serves as the preliminary event for the NCAA Championship, which OU has advanced to every year since 2011. The low five teams and the low individual not on a qualifying team will go to the NCAA Championship, slated for May 28-June 2 at Grayhawk Golf Club in Scottsdale, Ariz.

Oklahoma is the winner of five NCAA Regionals in school history, including the 2018 NCAA Regional at the Jimmie Austin OU Golf Club, paired with titles in 1989, 1995, 2001 and 2015. Most recently, the Sooners finished third at the Pullman Regional in 2019, and the 2020 championships were canceled.

Hybl’s team enters the postseason as the consensus No. 1 team in the country after finishing as the runner-up by one shot at the Big 12 Championship. The Sooners have four team wins in 2020-21, second-most in a single season at Oklahoma. More impressively, OU has grabbed a top-five team placement at 24 of its last 25 tournaments.