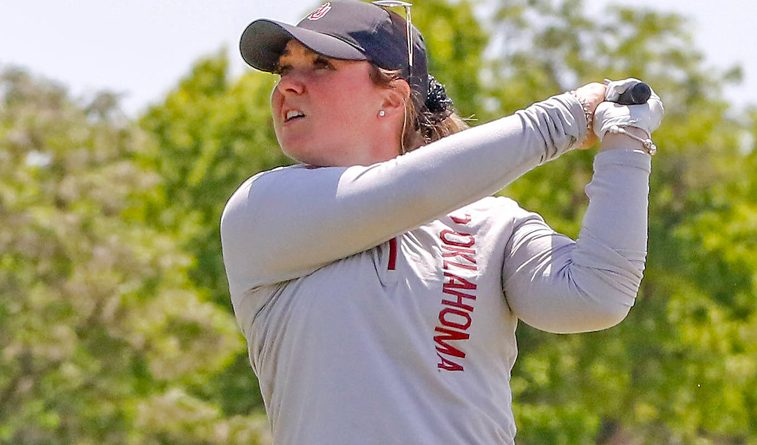 NORMAN – No. 20 Oklahoma women’s golf opens play in the NCAA Golf Championships on Monday at the NCAA Austin Regional. The No. 6 seed Sooners are one of 18 teams taking part in the three-day tournament at the par-72, 6,341-yard University of Texas Golf Club in Austin, Texas.

The Sooners will be grouped with golfers from Florida and Auburn in the opening round, teeing off of hole No. 10 beginning at 8 a.m. CT.

Oklahoma is making its seventh NCAA Regional appearance under head coach Veronique Drouin-Luttrell, and aims to qualify for the finals of the NCAA Championships for the fourth time since 2012.

The 18-team regional, hosted by Texas, is one of four 54-hole preliminary events for the NCAA Championship finals. The six schools with the lowest scores and three top-finishing individuals not on an advancing team from each regional will move on to the finals, which are set for May 18-23 at Karsten Creek Golf Club in Stillwater, Okla.

“It’s exciting whenever you get to continue your season in May,” said Drouin-Luttrell. “For us, this is no different than every qualifier we’ve had on the weekends all year long. This tournament should be perceived the same way. It’s all about embracing the challenge, having fun and executing.”

The Sooners played the UT Golf Club earlier this season for The Besty Rawls, taking ninth place in the event. Oklahoma hopes that both its familiarity with the course and its experience in previous postseason events will be a factor in the regional.

“I think it will always take a lot to get to the national championships, but I think we have an advantage in a lot of ways,” said junior Julienne Soo. “We’ve seen the course before, most of the team has played in regionals before and we’ve played with a lot of these teams this season. We know what it takes.”

Oklahoma enters the NCAA Championships coming off of a strong regular season that included two tournament titles and seven top-five finishes. The Sooners have claimed first or second place in four of their last six tournaments and boast the fifth-best average score in the country (73.15).

1. Hannah Wood, senior: Named to the All-Big 12 Team…Boasts five top-20 finishes over her last sixth tournaments, including a fourth place showing at the Big 12 Championship…Took fifth at the Clover Cup…Climbed 15 spots in the final day of the Hurricane Invitational to finish in 13th place…Placed in 20th at the Westbrook Invitational…Named Big 12 Co-Golfer of the Month in November after leading the Sooners to a second-place finish in the Battle at the Beach in Cabo San Lucas, Mexico (Nov. 3-5) in the team’s only November tournament…Shot a 4-under 209 in Cabo to tie for fourth place and secure her second top-10 finish of the fall season…Earned sixth place at the 2017 Schooner Fall Classic while playing as an individual.

2. Valerie Tanguay, senior: Has claimed three top-10 finishes in her last four tournaments…Named to the Big 12 All-Tournament Team after finishing in eigth place at the conference’s championship…Secured fourth at the Clemson Invitational while competing individually with a 209 (-7)…Tied for second place at the Hurricane Invitational while competing in the event as an individual, shooting a career-best-tying 67 (-5) on the final day to finish with a 211 (-5)…Tied for 26th at the Jim West Challenge with a 216 (+3)…Owns 10 career top-20 finishes, including four in the top 10.

3. Julienne Soo, junior: Named to the All-Big 12 Team…Captured the Clover Cup title with a 54-hole score of 211 (-5)…Has claimed five top 10 finishes this season…Tied for 14th at the Hurricane Invitational with a 225 (+1)…Took sixth at Battle at the Beach with a 210 (-3) to close the fall portion of the schedule…Tied for ninth place with a 2-under 214 at the Maryb S. Kauth Invitational…Named the Big 12 Women’s Golfer of the Month for the month of September after recording two top-10 finishes and shooting under par in five of six rounds…Her 204 (-9) at the season-opening Jim West Challenge is the fourth-lowest 54-hole score in program history…Secured ninth place at the Schooner Fall Classic with a 3-under 210…Boasts 11 top-10 finishes in her career, all of which have come in her last 19 tournaments.

4. Kaitlin Milligan, freshman: Tied for 17th with a 223 (+7) at the Hurricane Invitational…Named Big 12 Golfer of the Month for February…At the Westbrook Invitational, shot a 54-hole total of 199 (-17) – the lowest individual tournament score in OU history – to finish in second…The freshman had opened the event with a 62 (-10) in Sunday’s first round, marking the lowest 18-hole score in program history (previous low was 65), the best in Big 12 history and the lowest in NCAA Division I women’s golf this season…Finished in a tie for 13th with a 214 (+1) at the Battle at the Beach…Tied for 16th at the Schooner Fall Classic with a 1-under (212)…The first OU freshman to earn a top-20 finish since current seniors Ana Ruiz and Hannah Wood in 2014.

5. Sydney Youngblood, redshirt freshman: In the lineup for the second time this spring, coming back from a shoulder injury from the fall…Claimed ninth place at the Jim West Challenge with a career-low 209 (-4) in her first tournament back with the Sooners after a season-ending injury in 2016-17…Tied for 36th at the Schooner Fall Classic…Played in OU’s first three tournaments of 2016-17 before suffering a shoulder surgery and claiming a medical redshirt.