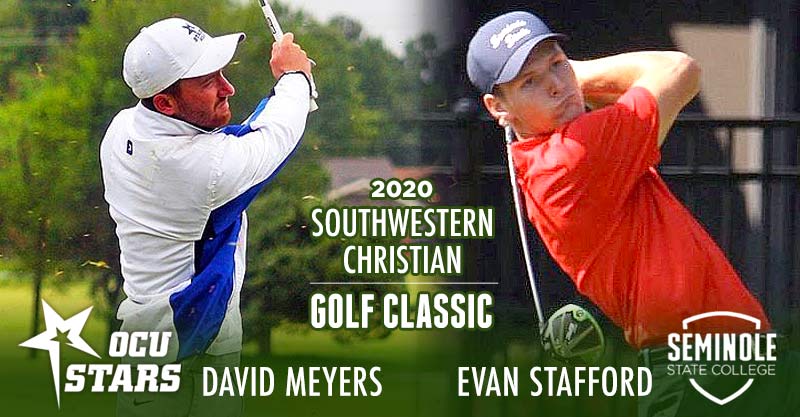 OKLAHOMA CITY – Seminole State’s Evan Stafford edged Oklahoma City University’s David Meyers by a shot in the Southwestern Christian men’s golf classic on Wednesday at Lake Hefner Golf Course. Stafford finished at 138 (69-69) while Meyers shot rounds of 67-72 for a 139 total before the tournament was called off due to persistent rain.

Emiel Van Geet led the host Southwestern Christian with rounds of 67-73 to tie for third and help his team to a seven-shot victory over Oklahoma City. Teams completed 36 holes at Lake Hefner Golf Course before rain canceled the final round of the tournament. The Stars played 10 holes of the last round before tournament officials called the event. See complete team and individual results here.

Rain fell throughout the morning Wednesday with temperatures remaining in the low 50s. The rain increased around mid-day to end the tournament. The low temperature of 50 degrees Wednesday tied the record low for this date set in 2012.

Conditions at the course took a drastic turn Tuesday evening. The temperature reached 88 degrees late in the afternoon with hot conditions. Rain came to halt play in the second round. The temperature dropped 15-20 degrees in an hour and continued to fall through the night.

OCU is set to host the Southern Plains Intercollegiate on Sept. 14-15 at Gaillardia Country Club in Oklahoma City.

OKLAHOMA CITY – The Southwestern Christian women’s golf classic was canceled Wednesday after one round at Lake Hefner Golf Course.

Oklahoma City University played five holes when rain increased around mid-day when the tournament was called off. The tournament ended after 18 holes since the final round was not completed Wednesday.

The weather became cold, wet and rainy at the course Wednesday. Temperatures remaining in the low 50s with rain increasing throughout the morning. The low temperature of 50 degrees Wednesday equaled the record low in Oklahoma City for this date set in 2012.

OCU’s Lauren Behnken, a junior from Tulsa, Okla., shot 73 and produced her career-best finish with a second-place showing. The Stars placed second as a team. Complete team and individual results here.

The Stars are scheduled to play next in the Southern Plains Intercollegiate on Sept. 14-15 at Gaillardia Country Club in Oklahoma City.