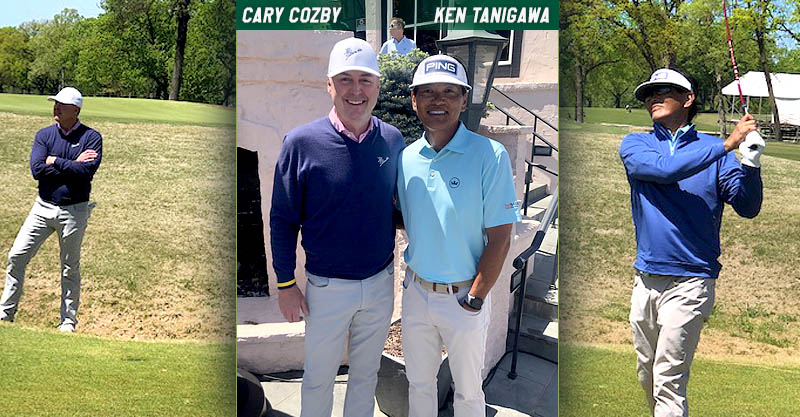 Ken Tanigawa, the 2019 champion of the KitchenAid Senior PGA Championship, made a great impression at Southern Hills Sunday both on and off the course. That continued Monday when the personable 53-year-old visited One Oak field, home to the minor league affiliate Tulsa Drillers of his beloved Brooklyn Dodgers. He visited the historic Greenwood district and the Tulsa Whirlpool plant, home to the parent company of the title sponsor.

Tanigawa, who won the championship in 2019 at Donald Ross-designed Oak Hill Country Club in Pittsford, N.Y., played Southern Hills Sunday morning in a prevailing south wind he’s likely to experience when the tournament is held May 27-30. In his group were Southern Hills head professional Cary Cozby, who will also be competing in the championship, as well as three-time and current Southern Hills club champion Andy Johnson and member Scott Mabrey, another excellent player.

“We’re all good players but you could tell the difference in his ball striking,” Cozby said. “He’s really, really good. He’s long and straight and the qualify of his approach shots was fun to watch.”

“A great player and just a super nice guy,” Johnson said. “It was a blast to play with him.”

Tanigawa’s play during the wraparound pandemic disrupted 2020-21 season hasn’t been quite as sharp, with his best finish in his most recent event, a tie for 24th in the Chubb Classic. But he found Southern Hills much to his liking.

“It’s a great venue, tremendously difficult but challenging and fair,” he said. “You’ve got to hit good shots, but if you do, you’ll be rewarded. The challenge will be to learn the greens. It’s a second-shot course. It’s got a feel where you can let it go off the tee . . . but the challenge will be around the greens. The second shot, chipping, putting, all that. That’s going to really make the difference for any player out here.”

Tanigawa said on first glance, he expects the winning score to be just slightly under par.

Notes: Also appearing at the press conference were Cozby, Jim Richerson, the president of the PGA of America; Jeff Noel, the vice president of communications and public affairs for Whirlpool, and Deborah O’Conner, the director of global corporate reputation and community relations for Whirlpool, which is the parent company of KitchenAid, the title sponsor. All were more than enthusiastic about the event and the experience in store for fans. For tickets and more information, visit www.srpga.com.