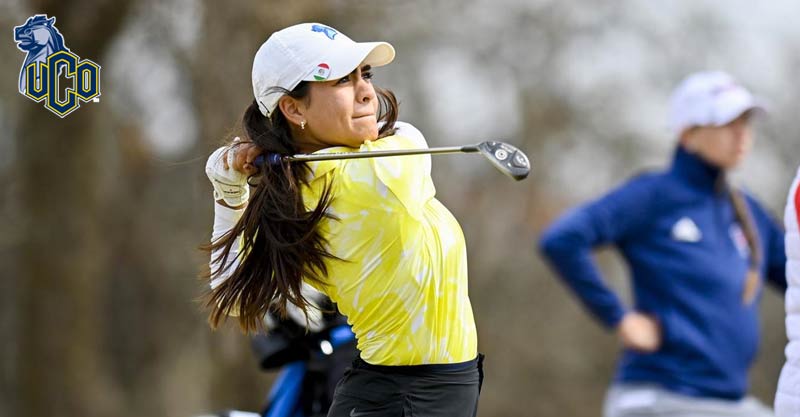 UCO grabbed a three-shot lead over Rogers State as 15 teams, all but a handful from Oklahoma, dueled Monday in the first round of the Diffee Ford Invitational at Kickingbird Golf Course in Edmond.

Southwestern Oklahoma State is another shot back in third place, followed by Oklahoma Baptist and Redlands Community College.

For UCO, Susana Olivares led the way with a first-round 74, which is tied for third in the individual standings. The freshman is 4-over par.

Emma Shelley also shot a top-10 worthy score in the first round, with the freshman posting a 5-over 75. Shelley is tied for seventh in the individual standings.

Madison O’Dell and Emily Miller both carded 75s after 18 holes and are tied for 16th place. Sydney Roberts’s 8-over 78 has her tied for 21st individually.

For Central’s second group, the Bronchos posted a 320 and are tied for seventh in the team standings. Kinsley Hall led the way with a 75 and is tied alongside Shelley for seventh in the player leaderboard. Mika Ramos wasn’t far behind with a 78. Arin Zachary posted an 83 while Faith Stewart shot 84.

For Rogers State, Jess Green shares the overall lead after an opening round 73 to finish the day tied with Megan Brown of Southwestern Oklahoma State as Green looks to defend her individual title in the event from last year. She led all players with four birdies on the day and also had nine pars. Green also tied for the lead in par-5 scoring.

Sydney Murray finished second for the Hillcats and sits in a tie for seventh in the 88-golfer field after the first round. Murray finished with a 75 in the opening round, Murray tied Green with nine pars on the day and also had two birdies in her round.

Mariana Flores and Marelda Ayal shared third place for the Hillcats in the round, as both golfers shot a 79 to open up the event and round out the scoring positions for RSU. Flores and and Ayal are tied for 25th overall. Flores led the Hillcats with 10 pars in the round. Ayal joined Green with a team best +1 in par-3 scoring on the day.

Jaelynn Unger finished the opening round tied for 36th overall after shooting an 81. Unger matched Green and Murray with nine pars on the day.

Paulina Flores made her official debut for the Hillcats on Monday, golfing as an individual in the event. Flores shot an 85 to sit in a tie for 55th overall.

The Hillcats finished the day with a 306 as a team, sitting in second overall in the 15-team field. Rogers State is just three strokes back of Central Oklahoma for the overall lead and one stroke ahead of Southwestern Oklahoma State in third heading into the final day.

Rogers State will wrap up the Diffie Ford Lincoln Invitational on Tuesday with the second and final round. Tee times for Rogers State begin at 9:42 and run through 10:22 a.m.