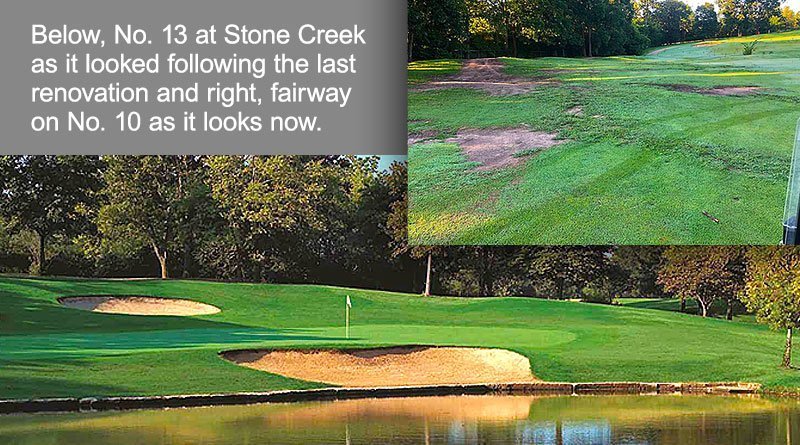 We will take Tulsa Mayor G.T. Bynum at his word. Though golf is never mentioned in any published breakdown we’ve seen of the $30 million in the Improve Our Tulsa bond package that is designated for Parks and Recreation, he has said that the long-neglected city courses will receive some funding for the many badly needed improvements.

Therefore, we are encouraging all Tulsa area golfers to vote for the package Tuesday, a package that includes $427 million for streets and transportation, $193 million for capital improvements, the $30 million for Parks and additional millions for police and fire.

How much if any of the parks funding goes to help the courses at Page Belcher and Mohawk Park remains to be seen. And what specifically will be addressed?

Personally we would like to see money from this package prioritized to hire an outside firm to remove and trim trees strategically and aggressively at Page Belcher, as the added sunlight and air flow would give the understaffed maintenance crew managed by Billy Casper Golf a fighting chance to combat the ever-widening areas that were formally turf grass but are now dirt and rocks. These areas have caused all the major competitive golf organizations in the state to rule out using Page Belcher courses as sites for events because playing the ball down results in too many unplayable lies in areas that should be maintained turfgrass.

The maintenance crew also immediately needs an additional $400,000 or more annual subsidy for at least five years to address the decline in fairway and rough conditions, including adequate annual fertilizer and weed control. This won’t come from the capital improvement funds, but is just a commitment the city is going to have to make if it wants the courses to improve to a point they can hold their own in the market.

For the bond money, a new patio designed to help host tournament play is under consideration and would help bring in additional revenue. A rebuild of the bunkers down to the drains and liners is badly needed. Once Stone Creek and Olde Page were restored to conditions commensurate with other municipal courses in Tulsa County, the rates should be raised to match or even exceed their competitors, which would all quickly move right back in front as the below-market rates set by the city have suppressed the profitability of the entire market for years.

We’ll see what comes to pass. Bynum, his chief of staff Jack Blair and Parks and Recreation Director Anna America would rather the city not have to subsidize golf and have other priorities, which is understandable yet ignores the fact the city OWNS the courses and has to have a guiding philosophy on what to do with them. They remain open to plans that involve selling or leasing parts of Page Belcher, as evidenced by a recent decision to seek appraisals of the courses. However several city councilors led by Jeannie Cue and Vanessa Hall-Harper, in whose districts Page Belcher and Mohawk Park are located, are concerned about both course conditions and what the plan is long-term for the city providing affordable yet quality public golf for its citizens.

It all keeps going back to the same fundamental question. At points in the past, city leaders obviously determined having excellent public courses fit in with the zoo, parks, museums, etc. as part of the city’s quality of life objectives. Yet there is no codified written policy or mission statement regarding golf, so adequate funding is at the whim of each administration. That should be reviewed as well.

Cue and Hall-Harper have encouraged other councilors to investigate and understand the plight of the city courses. We met recently at Page Belcher with those two and councilor Phil Lakin, who is a golfer and can explain the issues to the majority of the councilors who are not golfers and perhaps don’t grasp how far Page Belcher in particular has slipped behind a South Lakes, LaFortune Park and most municipal courses throughout the state in maintenance standards.

On the positive side at Page Belcher, the greens are in great shape, tee boxes are fine and the layouts remain two of the absolute best in the region. They are still the only public courses in the state with zoysia fairways, a huge competitive advantage when adequately fertilized. There’s a lot to build on. Pretty much the same can be said at Mohawk Park (except for the zoysia fairways), which has two charming layouts and the advantage of free water. Both just need a lot of TLC.

There is a lot to address going forward and passing the Improve Our Tulsa package is just a small but definitely needed first step.