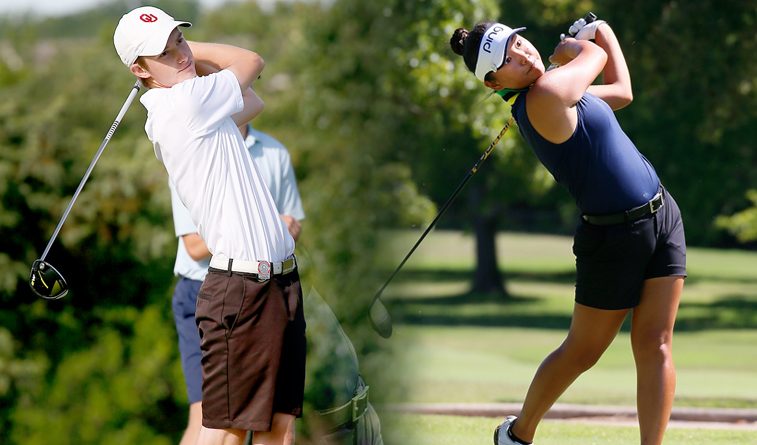 Photo: Lane Wallace of Yukon and Yujeong Son of Norman.

Future Sooners Lane Wallace and Logan McAllister watched together at Belmar Country Club recently, pummeling each other with joy as the University of Oklahoma stunned the college golf world by winning the second national championship in school history.

The two were together again Thursday, paired in the championship match of the Oklahoma Golf Association Junior Championship at Kickingbird Golf Club in Edmond. This time Wallace had a bit more reason to celebrate, as he prevailed 4 and 3 in the final match to win the event for the second consecutive year.

Wallace, of Yukon, will join the national champions in the fall, while McAllister, who won the stroke play portion for the second consecutive year, has another year at Class 3A Christian Heritage Academy, where he has won the state championship two consecutive years.

Yujeong Son of Norman birdied five consecutive holes and seven of her first 12 in taking down ShaeBug Scarberry of Purcell 5 and 4 for the girls title. In the boys 14-15 division, Jordan Wilson of Edmond edged Jaxon Dowell of Edmond 1 up.

McAllister has a penchant for tearing up Oklahoma courses, having shot a 62 in the first round of the state championship and a 59 at Belmar CC to win the club’s junior championship. But after a 20-foot birdie on the first hole against Wallace, he couldn’t get much going. He did birdie the par-5 ninth and the par-5 12th, but Wallace birdied the ninth as well, then rolled in a 15-foot eagle putt on 12 to take a three up lead and command of the match.

“I thought I might get a halve there after I made my birdie putt (from about 18 feet), but that eagle made it tough,” said McAllister, who then bogeyed the par-4 13th to fall four back.

Wallace was steady through out. In addition to playing the two par-5s in three under, he made a nifty birdie on the par-3 sixth hole to pull even, then took his first lead on the eighth when McAllister could not get up and down from behind the green.

Wallace and McAllister both agreed it was great to have two incoming members of the national champs playing for the title. Wallace texted McAllister in the morning to remember to wear Sooner gear, hoping they would meet in the final. Alas, McAllister had already left the house.

“It was incredible to watch (OU), no one expected them to win, but they proved it in both the stroke play and the match play,” McAllister said. “It makes it that much more exciting to be heading there.”

“It definitely also raised the bar,” Wallace said. “They are the national champions and have a lot of great players coming back. I’ll have to be on top of my game.”

Both players have busy summer schedules of national events and qualifiers, as does Son, who leaves this weekend for an AJGA event and then will point toward the junior and amateur events hosted by the USGA and PGA. She was completely dominant in this event, shooting 63-64 in qualifying and breezing through the match play portion without any match proceeding past the 15th hole.

“My putting was really good all week,” Son said. “That was a big key for me and took a lot of pressure off the rest of my game.”

Son birdied holes 8 through 12, including a 50-foot birdie putt on the par-4 10th hole, followed by an 8-iron to 4 feet on the par-3 11th. Scarberry, who said she is fully recovered from a freak accident in which she suffered a broken hand when struck by a ball while at a driving range, said she played well this week, but the birdie barrage was tough to withstand.

“She’s a very good player,” Scarberry said. “I’ve played her before and you just can’t make any mistakes.”