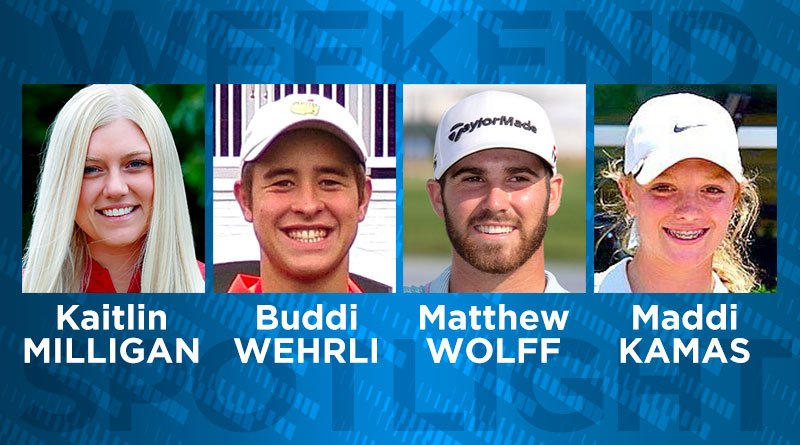 Buddy Wehrli of Jenks is one of 72 top juniors competing in the Major Champions Invitational hosted by six-time major winner Sir Nick Faldo. The tournament runs today through Wednesday on the Blue Course at Lookout Mountain in Phoenix. Players from 20 different countries are scheduled to participate. See more at http://majorchampionsinvitational.com

Gathering the week before The Masters, 72 of the world’s best amateur women’s golfers will compete over 54 holes of stroke play. The first two rounds will take place on the Island and Bluff nines at Champions Retreat Golf Club Wednesday, April 1 and Thursday, April 2. Following the second round, the field will be cut to the top 30 competitors.

“I’m so honored and excited to have received an invitation to play in the August National Women’s Amateur,” said Milligan. “I grew up watching The Masters thinking I would never have a chance to play at Augusta National – this is truly a dream come true. This is an amazing opportunity and motivated me to push my game to the next level. I can’t put into words how thankful I am to get the chance to not only play but compete at Augusta National. These will be memories I can look back on for a lifetime.”

The junior is one of the most accomplished golfers in OU history, holding a career stroke average of 72.75. She owns the program and Big 12 record for lowest round (62) and OU’s lowest 54-hole tournament score (199, -17).

Milligan has claimed a top-20 placement in 14 of her last 16 collegiate tournaments and finished in the top 12 of all five fall tournaments this season with a 70.21 stroke average.

A 2018 All-Big 12 selection, she wrapped up her 2018-19 campaign ranked No. 43 in the national Golfstat rankings and No. 53 in the Golfweek collegiate rankings. She qualified for the 2019 NCAA Championships as an individual after winning the NCAA Norman Regional at Jimmie Austin OU Golf Club. Her 2018-19 season stroke average (72.40) is the fourth lowest in program history.

“I’m so excited for Kaitlin to be in this year’s ANWA field,” said OU head coach Veronique Drouin-Luttrell. “Since arriving on campus, she’s worked tirelessly to get to where she is now. She arrived at OU in August 2017 ranked 2,350 in World Amateur Golf Rankings and with her commitment to this game and patience to get better is evident over the last few years. She’s now ranked 120 in the world. All of her dedication has paid off in an invitation to the most exclusive amateur tournament in women’s golf.”

Speaking of scoreboards, below is the latest ranking by Junior Golf Scoreboard of talented Oklahoma junior girls as high school golf gets ready to kick off. The first column is their ranking in state and the second their national ranking. Maddi Kamas of Kingfisher is the top-ranked player in the state heading into her junior season. Kamas is the 2019 WOGA Junior Girls Champion and won the OJGT Tour Championship. She won seven consecutive high school events last year before finishing second in the Class 4A state championship by one shot to Kenzie Kirkhart of Hilldale.