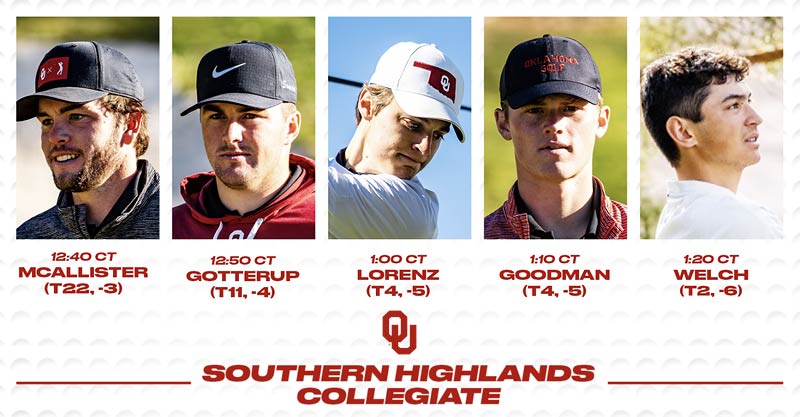 LAS VEGAS – Powered by a strong start, No. 1 Oklahoma signed for a 282 (-6) to grow its lead on moving day at the Southern Highlands Collegiate Monday. The Sooners (1, -26) lead No. 15 Texas by seven strokes entering Tuesday’s final round of the 54-hole tournament at Southern Highlands Golf Club in Las Vegas.

A trio of Sooners in Patrick Welch, Logan McAllister and Drew Goodman remain in the hunt for medalist honors. A win would earn them an invitation to the Shriners Hospitals for Children Open, which will take place Oct. 6-9, 2022, at TPC Summerlin in Las Vegas.

Welch (T1, -9) will look for his second career win on Tuesday. The senior won the 2020 East Lake Cup and was in the mix at the Puerto Rico Classic to open the spring as he finished tied for sixth. Welch collected six birdies on Monday, including a birdie on the 18th to move back into a tie for first with UNLV’s Caden Fioroni and Florida’s Fred Biondi.

McAllister (T4, -8) led Oklahoma with a 67 (-5) Monday to jump into contention as he sits one shot back after 36 holes. If the senior can find a way to win on Tuesday it would mark the fourth victory of his career, which would be tied for the second-most in program history behind Antony Kim’s five wins.

Goodman (T6, -7) fired an eagle and birdie on the front nine, but a trio of bogeys on the way into the clubhouse gave him a share of sixth after two rounds of play. The true freshman owns two top-10 finishes this season but hasn’t finished inside the top five.

Stephen Campbell Jr. (T32, -2) tallied a string of bogeys across his first five holes Monday but steadied his round to close the day with a 75 (+3) as an unattached individual.

Oklahoma has amassed a field-high 53 birdies thru 36 holes at Southern Highlands, and a solid final round could threaten the program record for birdies in a 54-hole event of 80, which the Sooners set a few weeks ago at the Puerto Rico Classic. If Oklahoma can hold off the field in the final round, it would be the team’s second consecutive win, fourth of the season and 33rd of the Ryan Hybl era.