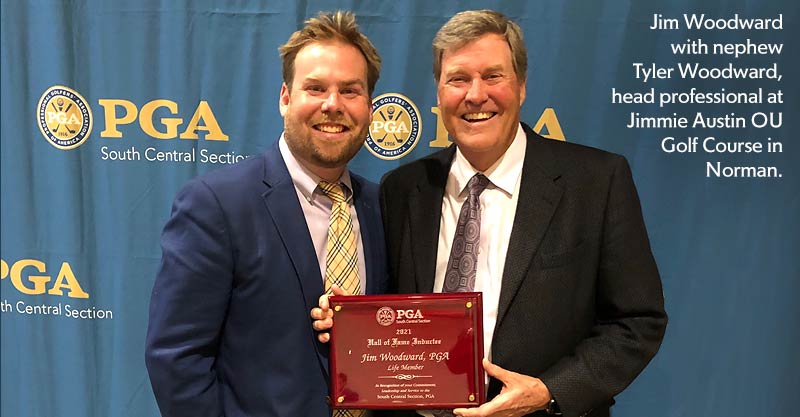 Jim Woodward has always been a colorful character in addition to an excellent golfer and teacher, and he didn’t disappoint in that regard as he gave his acceptance speech Monday night while being one of three golfers inducted into the PGA South Central Section Hall of Fame.

Speaking to the younger pros in the audience, Woodward was recounting examples of how he learned early in his career as an assistant at Oak Tree Country Club not to lie, cheat, steal or fraternize and relayed the story of how he was invited to a party by members after closing the shop one night. He arrived to find several women members sans clothing in a hot tub and was invited in, but chose to keep his clothes – and his job – and skedaddled.

Woodward  started his career as a club professional, but realized his true talent was in playing the game and worked his way onto the PGA Tour. Upon returning to the club pro ranks, he dominated section events throughout his late 40s and 50s and was a regular competitor in the National PGA Professional Championship and the Senior Professional Championship, an event he won in 2012 when he hit a 4-wood from 245 yards to a foot for an eagle on the final hole.

“I could always play,” Woodward said. “I may have been a nice guy, but when I was on the course I wanted to tear out your heart and stomp on it, then be a nice guy after the round.”

Woodward competed in 18 major championships and made 47 cuts in 126 PGA Tour events, with three top-10s and one second. His PGA Tour career was shortened by a right knee injury. At the section level he was Player of the Year in 1999, and won a good percentage of section events he entered, while mostly concentrating on events that would give him access to senior major championships.

“I’m humbled by this,” Woodward said. “Forty-two years ago when I got in this business I never dreamed about a Hall of Fame. I’ve been very fortunate. I got to live a life in golf that nobody should be able to, got to touch all levels of it. I got to be an assistant pro, head pro, director of golf, tour pro, teaching pro.

“But the only thing I’ve been good at is playing golf. I was not a bad teacher, but I was blessed with the ability to play golf.”

Woodward, who teaches at Oak Tree National, said his teaching skills came from watching the best instructors during his years on the Tour, including Butch Harmon, Dick Harmon (Woodward’s instructor), Jim McLean and others.

“I watched really good teachers interact with really good players and figured out what they did,” he said. “How are they so much better than the other guys.?  If I hadn’t had that chance to be out there I wouldn’t have got to experience that.”

“Butch was just so good at taking a guy and make him think he was better than he was,” Woodward said. “He kept things very simple, very easy to listen to, very easy to learn from.”

Woodward got his first lesson from Oklahoma Golf Hall of Fame professional Ernie Vossler and later worked with Dan Snider and Vern Frazier, a Harmon disciple who was Woodward’s mentor during his PGA Tour years.

Woodward, 64, said he knew his career was winding down when he qualified for the Senior Club Professional Championship in 2015 and didn’t feel nervous on the first tee.

“When I teed off in that tournament I did not have one butterfly,” he said. “I knew then that if I’m not nervous, it’s not right. I knew when I won it in 2012 I kind of went, now what the heck do I do? That was a pinnacle for me. It’s kind of like a dog chasing a ball, sooner or later you get tired of it.”

Awtrey, who was inducted into the Oklahoma Golf Hall of Fame in 2019. was introduced by his son Justin, who recently became the general manager at The Oaks Country Club in Tulsa.

Awtrey played collegiately at the University of Oklahoma and after graduating with an accounting degree in 1966, his career in the industry began as an assistant professional for 2017 Oklahoma Golf Hall of Fame inductee Joe Walser at Lake Hefner Golf Course in Oklahoma City. Awtrey later returned to his alma mater as head coach from 1972-77 and led the Sooners to three NCAA tournament appearances while mentoring three All-Americans.

After leaving the OU program, Awtrey served a variety of roles with the PGA of America and South Central PGA Section, from treasurer and president of the section before becoming a member of the PGA Rules Committee and its Board of Directors.

In 1986, the PGA offered Awtrey the position of tournament manager. Nine months later, he was selected as Executive Director on an interim basis and soon became the first PGA professional ever to hold the title. In 1993, Awtrey was named the PGA of America’s first CEO and held the position until his retirement in November 2005.

During Awtrey’s tenure, the PGA of America enjoyed unprecedented success. Most notably, the Ryder Cup became golf’s preeminent international competition and the PGA Championship gained in stature as one of golf’s four majors.

Mickelson, will he or won’t he?

Since it is their championship, we conducted an informal poll of PGA Professionals attending the section trade show Monday if they thought Phil Mickelson’s recent misadventures would wind up with him not defending his championship when the 2022 PGA Championship is conducted at Southern Hills Country Club May 19-22.

The results were about even between those who said he would play, would likely not play and weren’t sure. Some had been intently following the situation while others were only somewhat aware of all of his statements and actions regarding the proposed Super Golf League sponsored by LIV Golf Investments, with access to a fund exceeding $500 million.

Cary Cozby, head professional at Southern Hills, was one of those who said he expected Mickelson to defend his title, won at age 50 last May at Kiawah Island. But since Mickelson doubled down on his comments criticizing the PGA Tour and mostly apologized to the Saudis in his published statement last week, it’s difficult to see where he will play in PGA Tour events prior to the PGA Championship, leaving only The Masters on his schedule. The situation could change dramatically on a daily basis, so most pros were taking a wait-and-see attitude.

Assistant Golf Professional of the Year
Jacob Baird, The Club at Indian Springs