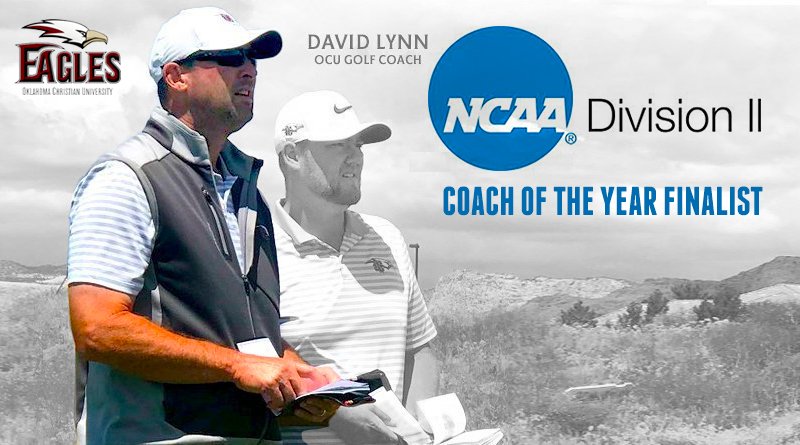 College Around Oklahoma Oklahoma Christian
May 1, 2020May 1, 2020 Ken MacLeod

NORMAN, Okla. (April 30, 2020) – The Golf Coaches Association of America named Oklahoma Christian’s David Lynn on Thursday as one of five finalists for its NCAA Division II men’s coach of the year honor, known as the Dave Williams Award presented by Golf Pride Grips.

It’s the first time in OC’s Division II era (which started with the 2012-13 season) that Lynn has been a finalist for the GCAA national honor. The other finalists for this season are Luke Calcaterra of Arkansas Tech, Darcy Donaldson of Georgia Southwestern, Mark Immelman of Columbus State (Ga.) and Jimmy Stobs of Barry (Fla.).

Lynn guided the Eagles to three wins in seven tournaments during the season, which ended in March due to the COVID-19 outbreak. OC was ranked No. 11 in the final Bushnell Golfweek Division II coaches’ poll. In their six tournaments against Division II competition, the Eagles won three times, finished second twice and third once.

OC posted an 80-4-1 mark in Division II play and didn’t have a losing record against any Division II team, splitting with No. 6 Arkansas Tech, No. 21 Colorado State-Pueblo and California-San Diego while going 3-1 head-to-head against No. 10 St. Mary’s (Texas).

“It is such an honor to be chosen by my peers as a finalist for the Dave Williams Award,” Lynn said. “This honor is a direct result of all the hard work my team put in this season, on and off the golf course, and I am extremely grateful for that. In times like these, we especially appreciate the opportunity to compete and I can’t wait to be with my team again.

“I’m also thankful to coach at OC and appreciate the support of my administration and staff for all they do to help us be successful.”

Georgia Southwestern posted four victories during the 2019-20 season under the direction of Donaldson. The Hurricanes also finished the year with three top-five finishes and closed out the year as the No. 1 team in the Division II coaches’ poll.