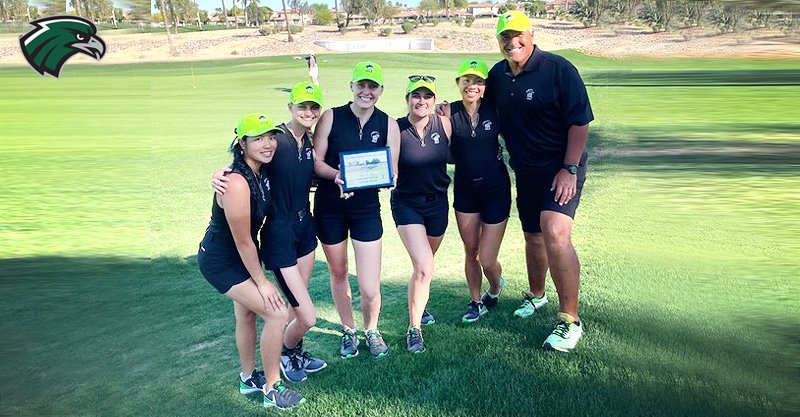 GOODYEAR, Ariz. — Northeastern State rallied from a ten-stroke deficit to claim a huge comeback win at the 28-team Palm Valley Classic Saturday.  The RiverHawks shot the lowest round of the day with a 290, beating Cal State Monterey Bay by a pair of strokes on a 588 score.

Monterey Bay led the field by ten entering the day but shot a 15-over to open the door for the RiverHawks to take the win with a stellar round.

NSU shot a season-best 290 in the final round to earn its first victory of the season.

Kaylee Petersen paced the RiverHawks on the leaderboard and was tied for fifth overall with a 145 (72-73).  Aitana Hernandez was one stroke back, carding an even 72 in the final round, placing tied for eighth.

Northeastern State will be idle until April 21-23, when they will play in the MIAA Championships.

In the biggest tournament field – 28 teams and 146 players – that an OC women’s team ever had competed against, Benavides Herberth continued her recent strong play, recording two birdies en route to a 2-over-par 74, which put her at 147 in the two-day event.

OC slipped two spots from Friday in the team race, posting a team score of 303 to close at 603. The Eagles tied with No. 20-ranked Texas A&M-Commerce, just one shot behind No. 10 West Texas A&M.

The Eagles’ top finisher after Benavides Herberth was sophomore Wilma Merenmies, who had two birdies and tied for 21st at 149 after also shooting a final-round 74. Two shots further back at 151, after a final-round 77, was junior Alexandria Bennett, who recorded a team-high four birdies.

Additionally for CU, Ellie Fellers finished her scorecard with a 78 to give her a 159 and Emma Englefield shot 79 on Saturday to finish with a 168. Freshman Malerie Nyberg finished the event one back of Fellers after carding an 83 in the final round of play.